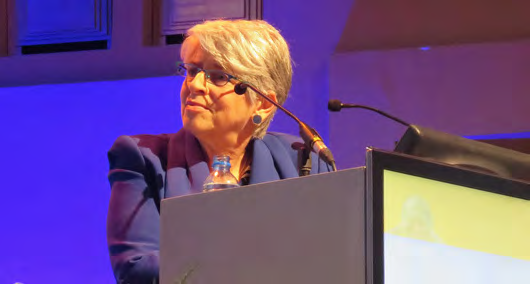 Friday 18 October 2013
Contents
Anti-HIV drug in development shows promise
Judith Feinberg of the University of Cincinnati at EACS 2013. Photo by Liz Highleyman / hivandhepatitis.com Although currently available is safe and highly effective, researchers believe there is still benefit in developing new drugs that attack HIV in different ways. Cenicriviroc was compared with , one of the most frequently used anti-HIV drugs, in a trial involving people starting HIV treatment for the first time. The study also compared two Cenicriviroc is in the anti-HIV drug class of from locking on to CD4 cells by blocking CCR5 co-receptors, found on the surface of the cells. Cenicriviroc also blocks CCR2 receptor cells, which cause inflammation in the body. This class of drugs only works for people who have a type of HIV called CCR5-tropic. The new drug was shown to be as effective as efavirenz (Sustiva, also in the combination pill Atripla) in suppressing viral load, with fewer particular, lipid levels (, or

blood fats) reduced in people on cenicriviroc, while they increased in people on efavirenz. However, some people taking cenicriviroc had raised creatine levels, which can indicate muscle The positive results mean that investigators can go on to develop cenicriviroc further, including the production of a fixed-dose combination pill also containing (3TC, Epivir). This combination pill is intended to provide an alternative to Truvada) and will be tested in combination with another potent antiretroviral. The trial had a relatively high drop-out rate, which researchers thought was due to the fact that the dosing regimen for all three arms was quite complex, involving a larger number of pills than most HIV treatment regimens require these days. However, since this trial, a new formulation of cenicriviroc has been developed, which means it can be taken as a single pill. Related links
Numbers of people with drug-resistant HIV in
Europe increasing
Novel treatment strategies and a wider range of anti-HIV drugs provide new options for people whose treatment choices are limited. One reason for this may be if their strain of HIV is resistant – where a particular drug or class of drugs no longer works effectively against that strain of HIV – can occur because someone is on an HIV treatment that isn’t working. It is also possible to be infected with a strain of HIV that is already resistant to one or more anti-HIV drugs. Having drug-resistant HIV can cause a number of problems. HIV replication may not be will increase, and further resistance – to a wider range of drugs – can develop. This is particularly problematic in places where treatment choices are already limited. To avoid this situation, many – including those published by the European AIDS Clinical Society (EACS) – recommend that drug-resistance tests are done before people start HIV treatment. However, this does not always happen, with countries in eastern Europe less likely to do pre-treatment resistance tests despite having higher rates of resistance. Previous estimates of drug resistance in Europe have looked mainly at the proportions of HIV- positive populations with resistant virus, without taking into account the fact that actual numbers of people living with HIV continue to rise. This means that the caseload of people whose HIV treatment and care may require more careful management is growing. Related links 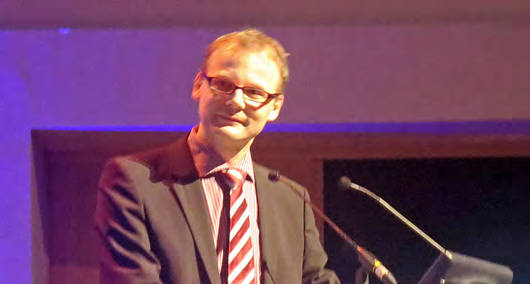 New drugs offer a 'revolution' in hepatitis C
treatment
Heiner Wedemeyer, Hannover Medical School, at EACS 2013. Photo by Liz Highleyman, hivandhepatitis.com Infection with the unlike HIV, is . However, it has always been on the HCV genotype involved. Prospects of a cure have recently improved significantly with the Heiner Wedemeyer, from Hannover Medical School, Germany, described the new drugs as “a The first DAAs in use – – still need to be used in combination with pegylated interferon and ribavirin, the previous standard therapy. They can shorten the length of treatment and increase cure rates, but have their own side-effects, complicated dosing and potential interactions with other medications. HCV drugs in development are easier to take and are better tolerated, with cure rates rising further. The ultimate aim is to develop an HCV treatment that does not include pegylated interferon, avoiding the drug’s side-effects and the need to take it by injection. Such new regimens should significantly increase the number of people able to tolerate HCV treatment, increase cure rates, and reduce the number of people who go on to develop serious As with anti-HIV drugs, hepatitis C treatments fall into several ‘classes’ of drug, and these new drugs work by attacking HCV at different stages of its lifecycle. Interferon-free regimens will, again like HIV treatment, need to involve a combination of drugs from different classes. New regimens are much less complicated – usually once a day – and better tolerated. Although trial results – of some of these new drugs, in particular – are promising, there are still challenges. Cure rates are still low in some groups of patients, depending on their genotype and any prior liver damage, for example. Drug interactions may cause difficulties. And finally, cost may be a barrier. Wedemeyer cautions that physicians may have to advocate to get access to these treatments for as many people as possible.

New EACS HIV treatment guidelines: mobile app
available
The European AIDS Clinical Society (EACS) has published updated 2013 guidelines for treatment of adult HIV infection, co-morbidities and HIV/hepatitis co-infection. You can download a mobile app version of these guidelines for iPhone, iPad or Android device from the Apple Store or from the Google Play store, by searching for ‘EACS Guidelines 7’. The app costs €22 (£18.66; US$29.99). Aidsmap.com will publish a news report on expert discussion of the new guidelines after the
: Keep up to date with all the exciting projects, latest achievements and new developments that are going on in the world of NAM. Follow NAM on twitter for links to hot off the press news stories from our editors covering key developments and conferences as they happen. Our news feed is NAM's coverage of the 14th European AIDS Conference has been made possible thanks to support from the European AIDS Clinical Society (EACS). NAM's wider conference news reporting services have been supported by Boehringer Ingelheim, Bristol Myers-Squibb, Janssen and

NAM is an award-winning, community-based organisation, which works from the UK. We deliver reliable and accurate HIV information across the world to HIV-positive people and to the professionals who treat, support and care for them. For more details, please contact NAM:
NAM Publications
Registered office: 77a Tradescant Road, London, SW8 1XJ Company limited by guarantee. Registered in England & Wales, number: 2707596

12-Nov-2010I am currently undergoing a six course treatment of FEC to ensure clearance of breastcancer. What I find worrying is that I am getting a side effect that does not seem to havebeen experienced by any of the people undergoing the same course. Whilst I appreciatethat I have not waded through every last bit of data on this subject, the attitude of the doctorswhen I mention this side effect