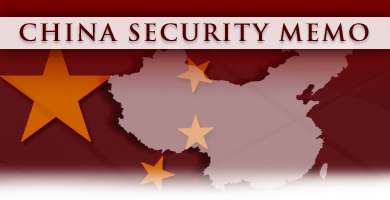 China Security Memo: April 8, 2010 | STRATFOR China Security Memo: April 8, 2010
Counterfeit Viagra
The head of the Hong Kong customs office’s Intellectual Property Investigation Bureau said that approximately 80 percent of counterfeit drugs seized in Hong Kong are used to treat impotence, according to an April 5 report in a Hong Kong newspaper. STRATFOR has noted the prominence in China of imitation Viagra, which reportedly generates more profits than any other good on the Chinese counterfeit market. The April 5 report notes that imitation Viagra and Cialis are the two drugs most often found by Hong Kong customs officials. These counterfeit products usually do have active ingredients that produce results similar to the original drugs, but the imitation drugs are completely unregulated, and there have been cases where the ingredients were too strong — quite the opposite of the placebos that The relatively high cost of Viagra has fueled this part of the counterfeiting industry. And because erectile dysfunction is an embarrassing condition, most people do not report the adverse side effects that might have been caused by a counterfeit drug. According to a STRATFOR source close to the industry, “lifestyle” drugs tend to be one area in which consumers knowingly purchase counterfeit pharmaceuticals so they can get a deal on the products or obtain them without a prescription. No one, for example, would be inclined to buy counterfeit hepatitis medication. According to Pfizer, the American pharmaceutical company that makes Viagra, the counterfeiters receive only small fines when they are caught, and given the high returns on fake Viagra, the fines do little to deter the practice. In China, counterfeiting is not considered a criminal act unless the value of the fake product reaches a certain threshold, and most Chinese counterfeiters are well- versed in trademark law and work hard to ensure that they stay under the threshold. Chinese counterfeiting is certainly a growing concern. The original April 5 media report said that the total amount of counterfeit drugs seized in Hong Kong grew by more than 60 percent from 2007 to 2009. The global financial crisis has also fueled the counterfeit industry in China as profits have fallen on legitimate exports and individuals and companies have looked for alternative ways to make Heightened Security in Shanghai
http://www.stratfor.com.libproxy.nps.edu/analysis/20100408_china_security_me. 5/11/2010 China Security Memo: April 8, 2010 | STRATFOR The World Expo in Shanghai, set to start May 1 and run until the end of October, has prompted the city to beef up security and to take measures similar to those in Beijing in the run-up to the 2008 summer Olympics and the National Day celebrations in October 2009. For example, Shanghai recently banned the sale of knives in the city and has put stringent controls on all trucks and ships carrying toxic chemicals. Shanghai office workers have even been issued a bomb-spotter’s guide.
On April 5 it was announced that city residents would have to register their names in order to buy rat poison and other pesticides, and shops selling such products have been told to keep detailed records of purchases. Although pesticides are known to have been used in murder cases in China, they are not effective in contaminating large water supplies and are not considered “weapons of STRATFOR sources tell us the biggest fear during the Shanghai expo is an outbreak of public protests over rising home prices. There has also been some discussion of the expo being a target for Uighur extremists, but the government is more concerned about issues that can align otherwise disparate groups usually separated by socio-economic and geographic barriers.
While Shanghai has seen an uptick in security in preparation for the World Expo, there has also been an uptick in security in Beijing, since many travelers to Shanghai will also likely visit Beijing. But we cannot help but wonder if there is another reason for new subway security measures, more armed police and studies evaluating the effects of toxic-gas attacks in Beijing. Domestic riots and protests have increased during the financial crisis, and it is quite possible that Beijing, like Shanghai, also worries about incidents that could tarnish the government’s image. If the government has information on new terrorist threats, it is not sharing that information with the public, but the uptick in security suggests that it is aware of something that necessitates a more aggressive Western Business Concerns
U.S. Chamber of Commerce reports on the business climate in China, released at the end of March, have generated considerable chatter on the country’s regulatory environment. This environment is becoming increasingly capricious and opaque, and there is a growing sense among Western businesses operating there that new regulations, specifically those intended to promote “indigenous innovation,” could hinder the future growth of foreign businesses in China.
According to one STRATFOR source, there is the dual and conflicting role of the Chinese government as both a business regulator and a global business competitor. It is one thing for the government to regulate or monitor content — which has many Western businesses concerned already — but it is quite another thing for the government to sell or give that content to domestic companies in an effort to grow national champions. These circumstances have been alleged or implied in the Google case, and it is unclear how accurate they are. In any case, the proprietary information obtained in the Google hacking was not limited to Google but involved more than a dozen companies, and the issue certainly predates the Google imbroglio.
http://www.stratfor.com.libproxy.nps.edu/analysis/20100408_china_security_me. 5/11/2010 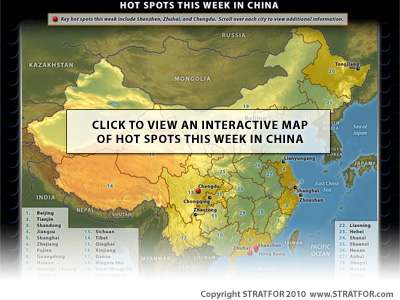 China Security Memo: April 8, 2010 | STRATFOR Another example is the state-run Chinese news agency Xinhua, which, in its role as government regulator, often demands that news agencies release their customer lists. Companies like Bloomberg and Dow Jones resist such demands, knowing that Xinhua could use that information to build its own customer base to compete with Bloomberg and Dow Jones. These two companies, both prominent U.S. business-news providers, are able to resist Xinhua’s demands because the banking industry in China relies heavily on the information they provide. However, other foreign companies operating in China that lack the sway of a Bloomberg or Dow Jones could risk being banned from the country if they do not comply with such demands. (click here to view interactive graphic)
A foreign tourist of unknown nationality was detained March 30 for illegally carrying 1.59 million in Hong Kong dollars (about $205,000) into Shenzhen, Guangdong province from Hong Kong, Chinese media reported. The suspect was driving an SUV across the border and was handed The man who allegedly murdered the deputy director of the Tongjiang Public Security Bureau (PSB) in Heilongjiang province was arrested on March 29, Chinese media reported. The suspect said that after smoking methamphetamine he picked up a shotgun, borrowed a friend’s car and drove to the victim’s apartment. The suspect said that when the deputy PSB director entered his own car he approached him and shot him in the The chief of Huangshan county was fired after a demolition protest during which a father and son lit themselves on fire in Lianyungang, Jiangsu The general manger of a China Mobile branch in Sichuan province may have been arrested for fraud, according to Chinese media, citing unnamed sources. He disappeared for a few days and was rumored to have fled with hundreds of millions of yuan. He was reportedly arrested but neither the police nor China Mobile has discussed the case publicly.
http://www.stratfor.com.libproxy.nps.edu/analysis/20100408_china_security_me. 5/11/2010 China Security Memo: April 8, 2010 | STRATFOR Fifteen suspects went on trial for using violence to monopolize the local beer market in the village of Shenzhen, Guangdong province. The leader of the gang has already been sentenced to 16 years in prison. Operating a wholesale beer company, the gang allegedly attacked trucks carrying Police in Zhuhai, Guangdong province, broke up a mobile-phone trafficking scheme. More than 60 suspects were involved in smuggling phones worth 7.8 billion yuan (about $1.15 billion) and evading 1.1 billion yuan (about $161 million) in taxes. The deputy chairman of the Zhejiang Provincial People’s Congress was detained by the Central Discipline and Inspection Commission for corruption in Zhoushan, according to Chinese media. He is rumored to have been involved with shipping tycoon Huang Shannian, who was detained for “illegal construction” in September 2009. China began a two-month nationwide campaign, led by the State Council’s Work Safety Commission, to ensure safety in the workplace.
A deputy prosecutor, three anti-corruption officials and a police officer in Zhaotong, Yunnan province, have been suspended while the death of a suspect they were interrogating is being investigated. The suspect was an education official suspected of accepting bribes who was being questioned in the prosecutor’s office in Zhaotong.
American and Canadian researchers at the University of Toronto tracked a cyber-espionage ring to Chengdu, Sichuan and Chongqing in southwest China. The Chinese group is believed to have hacked sensitive information on weapons systems from the Indian government. A bakery store manager was detained for questioning after a woman jumped out of an apartment building that was on fire the day before. The man is suspected of operating an illegal dorm for 14 of his employees in the apartment building. Three people impersonating a police officer, a prosecutor and a China Telecom employee cheated a Shanghai woman out of 620,000 yuan (about $90,000), according to local police. The woman said they called her claiming that she was suspected of being involved in a crime and needed to transfer money to them from her bank account.
The president of SureKAM, a software development firm, was arrested on March 31, 10 days after the company was listed on the Shenzhen stock exchange. He is suspected of offering bribes to an unknown recipient.
A man was sentenced to nine months in jail for buying and reselling personal information that he acquired through an instant-messaging service. He had information from 67,000 driver’s licenses and 120,000 mobile-phone registrations when he was arrested. He is the first person known to be convicted of this crime in China following the enactment of a new law addressing the problem in October 2009.
A Caucasian woman, nationality unknown, was arrested in Shenzhen airport for concealing 1 kilogram of heroin in nine boxes of chocolate. Officials thought the chocolate boxes were heavier than normal and opened them to discover the drugs. Nanjing police announced they had solved a toll-fraud case the week before in which a logistics company evaded 4.1 million yuan (about $600,000) in toll fees, which are based on weight and distance. The company did this by having two trucks travel on the same tollway, one fully loaded and going a longer distance and one empty going a shorter distance. Before leaving the tollway at the same exit, the trucks switch license plates and tollway access cards. Thus, the loaded long-haul truck gets charged for the shorter distance and the empty truck gets charged for the longer http://www.stratfor.com.libproxy.nps.edu/analysis/20100408_china_security_me. 5/11/2010