PAMIR Conference on Fundamental and Applied MHD Magnetism and magnetic particles in biology
MAGNETIC PARTICLES
FOR APPLICATION IN BIOMEDICINE
M. Timko, M. Konerack´a, N. Tomaˇsoviˇcov´a, P. Kopˇcansk´y, V. Z´aviˇsov´a Institute of Experimental Physics SAS, 47 Watsonova, 043 53 Koˇsice, Slovakia Introduction. Magnetic drug delivery by particulate carriers is a very ef-
ﬁcient method of delivering a drug to a localized disease site. Very high concen-trations of chemotherapeutic, inﬂammatory or radiological agents can be achievednear the target site, such as a tumor, without any toxic eﬀects to normal sur-rounding tissue or to the whole body. In magnetic targeting, a drug or thera-peutic radioisotope is bound to a magnetic compound, injected into a patient’sblood stream, and then stopped with a powerful magnetic ﬁeld in the targetarea. Depending on the type of drug, it is then slowly released from the mag-netic carriers (e.g., release of chemotherapeutic drugs from magnetic microspheresor biodegradable polymers) or confers a local eﬀect (e.g., irradiation from radioac-tive microspheres; hyperthermia with magnetic nanoparticles). It is thus possibleto replace large amounts of freely circulating drug with much lower amounts ofdrug targeted magnetically to localized disease sites, reaching eﬀective and up toseveral-fold increased localized drug levels [1]. One of the prerequisites for successof the application of drug targeting for the treatment of localized diseases is thedevelopment of an eﬀective method to transport the drug to the target site inthe organism. Biocompatible ferromagnetic particles have been used eﬀectively aspotential drug carriers since 1970. The targeting of drug-bearing magnetic parti-cles to a speciﬁc part of the body has been achieved by several directions. Onesolution is based on the use of a biocompatible polymers such as Polyvinyl alco-hol (PVA), dextran, polyethyleneglycol or cyclodextrin [2]. The coating acts toshield the magnetic particle from the surrounding environment and can also befunctionalized by attaching carboxyl groups, biotin, avidin and so on. The secondway consists in encapsulation of both a magnetic material and a drug in variousspecial matrix materials like albumin, polysaccharide or liposomes [3]. In the nextdirection, a drug can be grafted directly on the surface of a magnetic carrier with-out using polymeric binders or encapsulating materials to obtain a magnetite-drugcomplex.
Indometacin (previously spelt indomethacin in the UK) is a type of medicine called a non-steroidal anti-inﬂammatory drug (NSAID). All the medicines in theNSAID group reduce inﬂammation caused by the body’s own immune system andare eﬀective painkillers. Indometacin works by blocking the action of an enzymein the body called cyclo-oxygenase. Cyclo-oxygenase is involved in the productionof various compounds in the body, some of which are known as prostaglandins.
In this work we give a survey of the preparation and characterization of mag- netic carriers for two diﬀerent modes for coupling biologically active substances tomagnetic particles, e.g., covalently bound proteins and enzymes to freshly preparedmagnetite in the presence of carbodiimide (CDI) and entrapment in biodegradablePoly D,L-lactide polymer (PLA), respectively.
1. Experimental methods.
Magnetite particles (Fe3O4) were prepared by co-precipitating ferric and ferrous salts in an alkaline solution followed by wash- 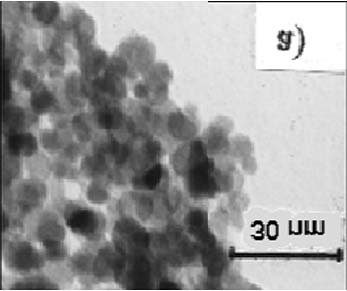 ing in hot water. 27.8 g of FeSO4.7H2O and 54 g of FeCl3. 6H2O were each dis-solved in 100 ml double distilled water and thoroughly mixed and added to 75 ml8M NH4OH, with continuous stirring at room temperature. Impurity ions such aschlorides and sulphates were removed by washing with copious amounts of hot dis-tilled water. The amount of magnetic particles in a given volume of the ferroﬂuidwas estimated by thermogravimetry and by magnetic measurements of magneti-zation curves (VSM magnetometer). The particle size distribution (10 nm) wasdetermined by electron microscopy and magnetic measurements by Chantrell etal. [4] procedure.
The clinically important proteins and enzymes bovine serum albumin (BSA), dispase, glucose oxidase (GOD), chymotrypsin, streptokinase and dispase were im-mobilized onto magnetic particles using CDI. The coupling reactions were carriedout under diﬀerent conditions to determine the optimum conditions for immobili-sation of proteins i.e., change of the pH of the reaction mixture and proportion ofmagnetic particles to proteins.
The polymer magnetic nanospheres were prepared according to a modiﬁed nanoprecipitation method. The starting procedure was as follows. PLA polymer(38 mg) and speciﬁed quantity of drug IND were accurately weighed and dissolvedin the mixed organic solvent of acetone (10 ml) (miscible with water) and chloro-form (2.5 ml). Then the organic phase was added dropwise into the aqueous phasecontaining of 0.5 ml the magnetic ﬂuid with the concentration Fe3O4 = 1 mg/ml,10 ml Pluronic (1.25 mg/ml) and 10 ml of phosphate buﬀer of pH =7.4 and stirredmagnetically at room temperature until complete evaporation of the organic sol-vent had taken place. Drug free polymer magnetic nanospheres were preparedaccording to the same procedure omitting the drug. To investigate the inﬂuenceof various formulation parameters on the drug incorporation eﬃciency the param-eters as pH of reaction mixture, volume of water, volume of stock polymer solutionand concentration of magnetic particles were followed.
2. Results and discussion.
bilization of several clinically important proteins and enzymes bovine serum al-bumin (BSA), dispase, glucose oxidase (GOD), chymotrypsin and streptokinaseto ﬁne magnetic particles (Fe3O4) using carbodi-imide (CDI) as a coupling agenthave been reported in our previous works [5]–[6]. In Figs. 1 and 2 the electron Electron micrograph of pure magnetic particles. 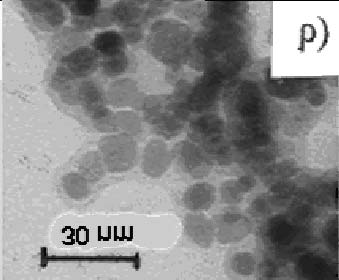 Magnetic particles for application in biomedicine Electron micrograph of protein bound to magnetic particles.
micrograph of pure magnetite particles and protein immobilized onto magnetiteparticles are shown, respectively. It is clear that proteins are layered over themagnetic particles.
The extent of coating of BSA onto the magnetic particles was determined by estimating the residual protein in the supernatant and washings. The estimationof protein content by a Bradford‘s method showed that the extent of coating ontothe particles increased as the pH of the reaction mixture was decreased. This is inagreement with the mechanism of the coupling reaction. Also, as expected, witha higher ratio between the magnetic particles and protein, the percent coatingattained was higher. The optimum conditions for the binding of BSA to themagnetic particles were observed at a ratio of magnetite : BSA : CDI of 2 : 1 : 2at room temperature and pH = 6.3, respectively.
Infrared spectrum of pure indometacin (a), PLA (b), encapsulated indometacin in PLA (c) and magnetic nanoparticles with indometacin encapsulated by PLA (d). The arrow showsposition of C = O streching band of indometacin. The spectra are shifted verticaly for clarity.
Another manner to create immobilize one of magnetically guided drugs is based on the use of a stabilizing agent such as dextran, PVA, pluronic etc., wherebya polymeric coat with a drug is formed on the surface of magnetic particles. In ourwork we used as a stabilizing agent pluronic, then a polymer shell was formed frombiodegradable polymer PLA (Poly D,L - lactic acid). With the aim to analyze theprepared nanospheres, infrared spectra of materials were obtained, as shown inFig. 3.
The measurements were performed by the KBr pellet method in the range from 4000 to 400 cm−1. In this method, a solid sample is ﬁnally pulverized withpure, dry KBr; the mixture is pressed in a hydraulic press to form a transparentpellet, and the spectrum of the pellet is measured. Fig. 3 shows typical spectra ofpure indometacin (a), PLA (b), prepared polymeric nanospheres with indometacin(c) and magnetic particles with indometacin incorporated in PLA in the rangefrom 2200 to 600 cm−1. The spectrum of indometacin displays a characteristicabsorption doublet at 1695 and 1715 cm−1 (C = O streching) and PLA displays acharacteristic absorption band at 1758 cm−1 (C = O stretching). As observed, thecharacteristic absorption band of PLA and indometacin observed at 1758 cm−1and 1695 cm−1, respectively, appears in the spectrum of the composite of PLAspheres with indometacin. Note, however, that a single PLA band at 1758 cm−1is broaden suggesting a slight contribution of the 1715 cm−1 band of indometacin.
The presence of characteristic bands of PLA and indometacin in the infrared spec-tra of the obtained complex magnetite-PLA-indometacin conﬁrmed a successfulencapsulation of indometacin and magnetic particles into PLA.
3. Conclusion.
In case of a direct coupling method the present ﬁndings clearly show that it is possible to bind proteins (such as Bovine Serum Albumine,Dispase, Chymotrypsine and Streptokinase) onto magnetic particles in the pres-ence of CDI without the aid of a primary coating of freshly prepared magneticparticles. On the other hand, a poorly water soluble drug Indometacine (an anti-imﬂammatory agent) was successfully encapsulated in PLA magnetic nanospheresby a spontaneous emulsiﬁcation solvent diﬀusion method.
This work was done under the auspices of the Slovak Academy of Sciences (Project VEGA No. 3199) and Government project ”New materials and components in submicrontechnology” (Project No.51).
REFERENCES
utt, J. Teller, M. Zborowski. In Scientific and Clinical Applications of Magnetic Carriers (first ed. Plenum Press, New York, 1997).
2. V.S. Zaitse, D.S. Filimonov, I.A. Presnyakov, R.J. Gambino, B. Chu. Journal of Colloid and Interface Science, vol. 212 (1999), p. 49.
afeli, G.J. Pauer. J.Magn. Magn. Mater , vol. 194 (1999), p. 76 (Pergamon Press, 4. R.W. Chantrell, J. Popplewel, S.W. Charles. IEEE Trans. on Magn., vol. MAG-14 y, M. Timko, C.N. Ramchand, A. DeSequeira, M. Trevan.
J. Mol. Catalysis B Enzymatic, vol. 18 (2002), p. 13.