Case study: Woman presents with neovascular
glaucoma
Because panretinal photocoagulation was not an option in this patient, endoscopic pars
plana vitrectomy was performed.
By Robert F. Haverly, MD, FACS
A 70-year-old woman was referred to me with neovascular glaucoma.
Her medical history was significant for hypertension and asthma. She was taking Vasotec (enalapril maleate, Merck), Advair (fluticasone propionate and salmeterol, GlaxoSmithKline) and albuterol. She had an ocular history of cataract extraction with posterior chamber IOL implantation in 1987 and Robert F.
argon laser trabeculoplasty in both eyes in 1994. The patient had scarring of her right cornea from a corneal ulcer in 2006. In 2008, the patient developed a central retinal vein occlusion in her right eye. Shortly thereafter, vascularization of the iris could be visualized. The referring ophthalmologist performed panretinal photocoagulation, which was incomplete because of the poor view into the eye. The referring ophthalmologist also gave an Avastin (bevacizumab, Genentech) injection to the affected eye. The IOP was temporarily controlled with these maneuvers along with Azopt (brinzolamide ophthalmic, Alcon) twice daily in both eyes, Lumigan (bimatoprost ophthalmic solution 0.03%, Allergan) in both eyes every night at bedtime and Alphagan (brimonidine 0.1%, Allergan) twice daily in both eyes. However, the IOP elevated with time. When I saw the patient, the IOP was 68 mm Hg and the patient was in pain. The patient also experienced a decrease in vision from counting fingers to hand motion. The cornea, iris and angle had vascularized and there was blood in the angle. There was a very poor view into the eye due to corneal scarring, edema and poor dilation from iris synechiae. Gonioscopy was difficult but revealed impressive vessels in the angle. The posterior chamber IOL was in good position, but with white lens material barely visible just posterior to the lens optic. The view of the retina was hazy because of the cornea and small pupil, and there was a mild vitreous hemorrhage (Figure 1). Panretinal photocoagulation could not be performed. 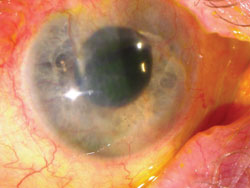 Figure 1. This is the patient’s eye
with neovascular glaucoma showing
significant corneal scarring and
vascularization. Phenylephrine
2.5% and tropicamide 1% were
placed prior to the photograph.
Note the poor pupillary dilation
secondary to the lens-iris synechiae
and the large vessels associated with
rubeosis.
 Would you perform a transscleral cycloablative procedure?  Would you perform a transscleral cycloablative procedure and place a glaucoma  Would you surgically dilate the pupil, perform a pars plana vitrectomy (PPV), and  Would you perform an endoscopic vitrectomy with endolaser of the retina and Surgical course
After discussing the treatment options with the patient, I performed an endoscopic pars plana vitrectomy with endolaser of the retina and of the ciliary body. The view was not clear enough to visualize the retina through the cornea, so an endoscopic approach was necessary. The endoscope with the endolaser cyclophotocoagulation (ECP) system (Endo Optiks) is ideal to assist with this type of vitrectomy. It can be performed through an opaque cornea and avoids having to stretch and dilate a rubeotic pupil. I used the 23-gauge vitrectomy system (Alcon). A 23-guage infusion port was placed in the inferior temporal quadrant and a 23-gauge sleeve was placed in the superior temporal quadrant. A larger 19-gauge sclerostomy was made in the superior nasal quadrant. A 19- to 20-gauge port is necessary to insert the endoscopic laser. With the infusion on in the inferior port, the straight 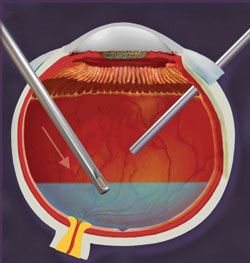 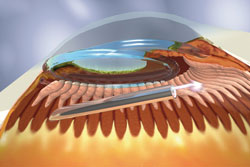 endoscope was placed through the 19-gauge opening. The Occutome (Alcon) was placed in the superior temporal port and a complete vitrectomy was performed (Figure 2). As the vitreous base was removed, several pieces of white lens material fell onto the macula. The lens remnants were located with the endoscope and removed with the Occutome. At times, the endoscopic probe tip was used to help move and crush the lens material into the Occutome. Figure 2. The endoscopic
Figure 3. The endoscopic probe is shown
probe is on the right through ablating the ciliary processes through the
the pars plana providing
pars plana. This is done while looking at
visualization of the vitrector the monitor connected to the endoscopic
on the left. While doing the
system. The IOL is shown above the
vitrectomy the monitor
endoscopic probe.
connected to the endoscopic
system, not the microscope,
is used to view the
procedure.
The endoscope was invaluable in locating and manipulating the lens material. Subsequently, the retina, pars plana, and lens-ciliary body complex could be viewed with the curved endoscope in its entirety. A complete panretinal photoablation was easily done with the ECP settings of 600 mW to 800 mW. After this, attention was turned to the ciliary body. A 180° cyclophotoablation of the ciliary body was performed as well as treatment of the processes to pars plana (Figure 3). An intravitreal injection of dexamethasone was given at the end of the case. The following day, the patient was pain-free and IOP measured 17 mm Hg and her vision was hand motion. The patient was placed on prednisolone acetate 1% and moxifloxacin. These medications were tapered over 4 weeks. Over the course of the next 3 months, the eye pressure rose to 28 mm Hg and brimonidine 0.1% was started. At 4 months the IOP decreased and the patient’s IOP is 16 mm Hg with no glaucoma medication. The patient feels as though she has some useful vision in this eye. The patient is especially grateful since the primary open-angle glaucoma has progressed in the other eye and requires a trabeculectomy with mitomycin C, seton or ECP. Discussion
Neovascular glaucoma is a serious complication of systemic and retinal disease. The IOP can rise rapidly, often resulting in extremely high IOP with irreversible and severe loss of vision. Early panretinal photocoagulation for neovascularization is necessary to ameliorate the devastating sequelae from neovascular glaucoma. Unfortunately, all too often the synechiae between the iris and the lens prevent adequate dilation of the pupil for treatment with panretinal photocoagulation. Today there is no substitute for panretinal photocoagulation. Transscleral diode laser cyclophotocoagulation is an option for treatment, but it is very destructive to the eye and vision. Usually vision is lost after this type of treatment and hypotony can ensue. I have found that ECP has tremendous results in patients with vascular glaucoma. A complete panretinal photocoagulation can be performed as well as ablation of the ciliary body at the same time. It avoids the poor visualization issues with a standard vitrectomy and allows for extensive panretinal photocoagulation. ECP in neovascular glaucoma can prevent the need for a glaucoma implant or a trabeculectomy. A 180° ablation of the ciliary body is usually enough to control the IOP without creating hypotony. In vascular glaucoma, the ciliary processes are already damaged and 180° treatment of the ciliary body is usually all that is needed. Other glaucomas usually require at least 270° treatment. When ablating the ciliary body through the pars plana, it is best to treat all the way to the pars plana because these structures also produce aqueous fluid. Treat the ciliary process until it whitens, shrinks and contracts, but avoid gas bubble formation and audible “popping.” The intensity of the treatment can be adjusted by the distance from the probe to the ciliary body. The closer the probe is to the target, the more intense the treatment. I use 200 mW to 250 mW of laser power. An intravitreal injection of dexamethasone at the end of the case is useful to reduce postoperative inflammation. Dexamethasone is short-lived and usually will not raise the IOP when given in this setting. In cases of vascular glaucoma, I have not found the need to perform a trabeculectomy or place a glaucoma implant if the ciliary body can be adequately treated with ECP. If the IOP is too high after the first treatment, additional ECP can be performed. A trabeculectomy can be performed as well as placement of a glaucoma implant if necessary. In patients who have conjunctiva that is scarred and vascularized, a trabeculectomy or placement of a glaucoma implant may be difficult. Such cases occur in patients who have had multiple eye surgeries, trauma or chemical burns. Patients with vascular glaucoma usually have such conjunctival tissue. The best choice in many of these cases would be ECP. References: