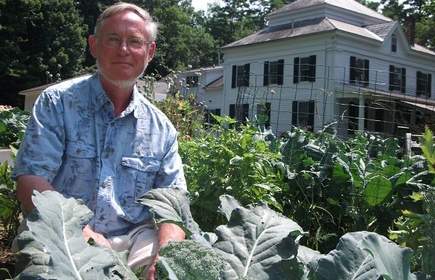 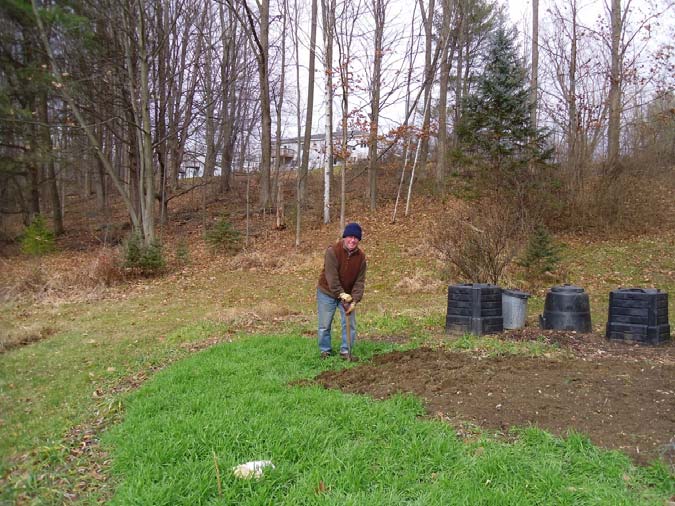 Dr. Alan Betts knows you’ll probably skip this story on his study of Vermont climate change if he waxes scientifically about his nearly half-century of scholarship on meteorology and theoretical physics. That’s why he’s instead serving up weather-defying kale from his Pittsford garden. When the 66-year-old atmospheric researcher moved to the state in the late 1970s, he wouldn’t leave any fruit or vegetable outside during winter. Instead, he harvested everything before frost took a bite each fall. This past year, however, the ground temperature dipped below freezing only 67 days — less than half the usual 150 days. Betts, as a result, could plant kale in November and, sheltering it under a sheet of glass, pick ready-to-eat greens Figure 2 Alan Betts turning over winter rye on Jan 2, 2012, just before the
ground freezes
been able to winter over something in the cabbage family,” he says. “The local foods that are now
available in unheated greenhouses have exploded.”
Log on to Betts’ website, alanbetts.com, and you’ll find his public talks, newspaper columns and
radio commentaries report what farmers and gardeners confirm throughout Vermont: Global
warming is sprouting the unexpected benefit of stretching the state’s growing season and ability to
seed new crops.
Dig a little deeper and you’ll also discover why the state’s leading climate scientist worries such
advancements could — as now witnessed in the rest of the nation — either drown or dry up.
‘New record’

Betts’ interest in climate first blossomed in his native England, where he studied science at the
University of Cambridge and earned a doctorate in meteorology from Imperial College in London.
Moving to the United States in 1970, he worked at Colorado State University before relocating to
Vermont — first to West Pawlet, then Weybridge, then his white clapboard Victorian home in
Pittsford in 1992.
To put down roots, he picked up a shovel and started a garden.
Breaking ground back then, Betts wouldn’t begin working the soil before the third week of April
nor plant until nearly Memorial Day. But with carbon dioxide and other greenhouse gases filling
up the atmosphere and forcing shifts in weather patterns, spring is arriving sooner. The scientist
points to the annual date of “ground melt,” which has advanced in his lifetime an average of some
three days per decade.
Five years ago, Betts thought he was making history by seeding his first frost-hardy salad greens
on April Fools’ Day and peas the same time everyone else filed their income taxes. But this
seeming Year Without a Winter, he planted a full month earlier: lettuce and spinach on March 1
and peas by March 15.
Spring’s second transition point, “leaf-out,” is also leaping forward — but only about half as fast
as ground melt, the researcher says. That means although he’s starting his garden in March, he’s
holding off planting frost-sensitive tomatoes, basil and squash until May — albeit at the beginning
of the month rather than on Memorial Day.
Betts is reaping bumper crops. He has harvested lettuce, spinach and peas since May — a full
month earlier than in 2007. His garlic now busts out in June rather than July. (Good thing: more
heat means less cold in his garage to preserve last year’s crop.) Now pulling potatoes, he’ll cap the
summer picking tomatoes and squash and the fall plucking brussels sprouts.
Betts’ salad days end with the first frost. When he moved to Vermont in the 1970s, he would
shiver in the middle of September. But in recent years, he hasn’t felt the chill until as late as the
end of October.
“My growing season between frosts has set a new record of over 180 days.”
Likewise, Betts used to dig up his garden before the cold burrowed down. Now he tucks his more
hearty crops in to see what springs up over the winter.

“We have been eating the best fresh tender kale I have ever tasted.”
‘Toward extremes’

Betts’ personal observations are confirmed by plant hardiness zone maps used by Vermont’s $4
billion a year farming sector.
The official U.S. Department of Agriculture map in place since 1990 labeled the Northeast
Kingdom as zone 3 (with annual lows of -40 to -30 degrees), the bulk of the state as zone 4 (with
lows of -30 to -20) and the southern tip as zone 5 (with lows of -20 to -10).
This year, however, the newly revised map shows the lows have grown higher. Vermont has lost
almost all its colder zone 3 up north, while nearly the entire southern half of the state and its
western Champlain valley now sits in the warmer zone 5.
No Vermont community has recorded temperatures that would move it into the more temperate
zone 6. But the eastern half of Massachusetts has heated enough to shift from zone 5 to zone 6,
and researchers predict that with continued global warming, southern Vermont may soon follow.
Fruit farmers are experimenting with peach trees amid their apple orchards and berry bushes. Yet
for all the green thumbs up, Betts sees a downside: Scientists project average Vermont
temperatures could rise as much as 10 degrees by the end of the century, but they can’t as easily
predict future precipitation that’s critical to crops.
Betts is concerned rain will be less evenly distributed and instead fall into periods of flooding
downpours or droughts that could harm farmers not only of fruit and vegetables but also livestock
($1.2 billion in annual state farm revenue comes from dairy cows that require silage and hay).
The researcher points to the two most recent winters — the snowy 2011 and sultry 2012 — as an
example of such ups and downs.
“It has been warming twice as fast in winter than in summer — almost a degree Fahrenheit per
decade — but the variability in winter is also at least twice as large as in summer. This was an
exceptionally warm winter that broke all records. It’s going to be well above the trend line. We’re
moving toward extremes.”
‘Choices we face’
So what’s a scientist to do? Betts is offering regular reports, talks and commentaries in this
newspaper and on Vermont Public Radio outlining the causes of global warming — he starts with
heat-trapping greenhouse gases emitted by the burning of fossil fuels — and how people can
respond.
“I see myself as a translator. The scientific community used to write its papers for scientists. I’ve
tried to close that gap and explain what is happening in terms everyone can understand. We’re
pushing the Earth toward a condition where it doesn’t have icecaps. Eventually things like sea-
level rise will get our attention and flood our coastal cities, but by then it will be too late to do
anything.”
Wading into such politically charged waters, Betts has wondered: Is he an analyst or activist? In response, he recently wrote a paper, “Communicating Climate Science,” recording his belief that “Humanity will be unable to deal with climate change, both in terms of mitigation and adaptation, until a broad spectrum of society is fluent in discussing the issues and the choices we face.” Dr. Alan Betts: In his own words
“Earth scientists face a profound ethical challenge. Humanity is an integral part of the Earth’s
ecosystem, but the waste from our industrial society is now driving rapid global climate
change. What is our responsibility as a community of scientists? Is it simply to follow tradition
and explore and discuss in our own world, largely isolated from the broader community, the
many interesting facets and complexities of the transformation of the Earth’s climate system
and then to publish our results in our private jargon in copyrighted journals that are not freely
available to the public that is funding us?
“I suggest it is time to reconsider our responsibilities to society and to the Earth. Humanity will
be unable to deal with climate change, both in terms of mitigation and adaptation, until a broad
spectrum of society is fluent in discussing the issues and the choices we face. Changing the
direction of our global society from its present unsustainable path is a moral and ethical
challenge as well as a scientific one. However, broad understanding of the limits imposed by
the Earth system is essential. Clear, open communication and discussion is needed at all levels
of society.”
— From “Communicating Climate Science,” an American Geophysical Union paper available

Betts is working to model not only the situation through his backyard but also solutions around his home and garage, be it his double-paned windows, improved insulation, air and water heating system that saves energy and money or Toyota Prius hybrid car that gets 50 miles per gallon. “We can’t manage the Earth itself, all we can do is manage our society. I certainly can’t tell anybody what to do to make the transition to more efficient, renewable sources of energy because it involves everyone. But what we do in the next couple of decades will have a huge impact by the end of the century and our grandchildren’s time.” Which brings him back to his garden. It takes time to plant, water and weed, he says. But what he does today determines what he reaps tomorrow. [email protected]

Divine Prozac: God’s Prescription for Worry and Anxiety We all struggle with our thoughts to one degree or another. For many people it is a constant battle to keep from becoming angry, frustrated, depressed, or worried. But in the midst of this battle, God has given us His Son, His Spirit, and His Word to fight these battles and to win them. He has also given us one specific passage of Script