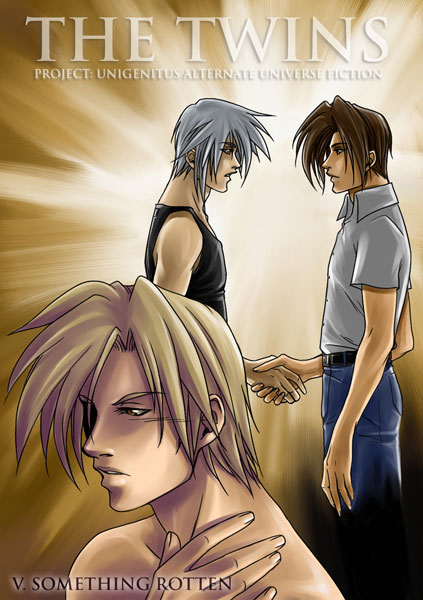 The Twins
By Lara Yokoshima
Edition by Wingless Demon
V. Something Rotten

Interrupting his soft and harmonious breathing, the silver-haired youth slowly
rolled his lazy body over the bed, changing from his right side to his left. He could
feel the warm sun on his face, trying to attack his weak pupils through his half-
opened eyelids. He stayed motionless for a few more minutes, until he finally
decided to wake up. To his surprise, he wasn’t sleeping alone.
“!?”
Seeing the short haired blonde in front of him, almost touching his own nose,
shocked Yamah, who was beginning to blush a little.
Koji?! What the…?? The confused and frightened youth was beginning to lose
control when he remembered. Oh, yeah… we arrived late last night. Koji was
tired and so very drunk. Right, he asked me to stay. I had too… I was really
worried he could do something crazy, Yamah could still remember that scene in
his mind, where Koji was hanging himself from the other boy’s arm, mumbling
something like: “please don’t go… I don’t want to be alone tonight… pleaseeee!!”

But why me? I mean, there is also… oh, right… Touga had to leave today. I
guess he had still to retrieve some important belongings from his home. Although
he left Brayden here so Koji would take care of him in his absence… the funny
thing is that I believe Brayden is taking care of him right now. How convenient.
Yamah rolled again over the bed, and saw Brayden sitting near and staring at the
youth somewhat worried, producing really soft wails. Yamah extended his arm
and just patted the dog’s head with a soft smile, as if telling the animal not worry.
Still, Yamah wondered why Koji was sleeping in the same bed as he. There were
two beds in the room, and he remembered taking that one and leaving Koji in the
other one. Maybe Koji was feeling cold and moved near me when I was
sleeping?… people act real strange when drunk.
Raising his body from the bed, Yamah sat on the edge, scratching his head while
he let a yawn escape his mouth. Fortunately, being as cautious as usual, he was
wearing his pants and underwear shirt when he went to sleep. He turned his
head just enough to watch Koji, who was still sleeping profoundly on the other
side of the bed. I bet he won’t wake up in a few more hours, Yamah thought. He
stared at the clock over the nightstand, noticing it was almost 11:00 AM. Too bad
it is Wednesday, but I don’t think I, or Koji for that matter, will go to school today.

This is the first in a series of concept papers commissioned by the International Trachoma Initiative (ITI) to bridge the mission and programmatic work of ITI with the current discussions in other fields related to health and development issues in poor countries. The general aim of the concept papers is to assist ITI to clarify and articulate the success of its current programs to eliminate blind