Rescue of Indian vultures - role of meloxicam?
‘Meloxicam to Prevent Rabies’ was the title of a provocative editorial in the renowned medical journal ‘The Lancet’ in 2006. Meloxicam to prevent rabies? How can that be? In the past, millions of vultures populated India and determined its face like rickshaws, fakirs and the Taj Mahal – until the end of the last century. In the early 1990s, ornithologists started finding dead vultures, birds that had succumbed without an obvious cause, and the first alarm bells were sounded. The numbers of dead and dying birds were terrifying. But what was the reason? Most of the birds that were necropsied had suffered from severe visceral gout, with a deposition of uric acid in the serosa, kidneys and liver. Scientists started looking for possible infectious agents, pesticides, viruses or other environmental reasons including stress, pollution, etc. that could explain the syndrome. It was not until January 2004, when J. Lindsay Oaks et al. published a paper in ‘Nature’, where they reported that residues of the well known anti-inflammatory drug diclofenac had been found in bovine carcasses, and that this was probably the cause of the disaster. Diclofenac is a powerful nonsteroidal anti-inflammatory drug (NSAID) that has frequently been used for the treatment of old and ill cattle, also of animals close to death. If these die within a few hours after treatment, their organs contain amounts of diclofenac sufficient to kill the vultures feeding on them. By that time, the numbers of three vulture species, most prominently of the Oriental White-backed Vulture (Gyps benegalensis), had already decreased by more than 95 % - and populations were still declining by approximately 40% every year. As of 2007, their numbers were down to ≤0.1% of the original population, thus unbelievably taking them from the position of the most abundant large bird in the world, with a population of some 70 million individuals, to the verge of extinction. Based on the new understanding of the role of diclofenac and its extreme and unprecedented toxicity, the manufacture of veterinary formulations of diclofenac for treating cattle was banned by the Indian government in 2006. This ban was strengthened legally in 2008 with further measures taken to discourage the use of human formulations of diclofenac for veterinary purposes. Still further steps need to be taken to plug remaining loopholes and block the use of diclofenac in cattle. The ongoing illegal use of the drug is unfortunately still an issue because of a lack of viable options to replace this efficient and well-tolerated medication in cattle. Furthermore, all feasible potential alternatives, such as flubiprofen, carprofen, flunixin and ketoprofen etc. are known to be unsafe for vultures. The only exception known to date is meloxicam. Whereas a single dose of 100µg/kg of diclofenac kills an adult vulture, a dose of 2.5 mg/kg meloxicam (which is otherwise more potent than diclofenac) is well tolerated by the birds. Thus, meloxicam gives the cattle a viable treatment option, while causing no harm to the vultures. Does that mean that the danger for the vultures is over? Unfortunately not, since some practical issues remain to be solved. A number of veterinarians, who had tried formulations containing 0.5% of meloxicam manufactured in India, reported adverse reactions like severe pain at the injection site, as well as a lack of the quick onset of effect known for diclofenac. These observations have been widely reported, resulted in a poor reputation for meloxicam, and turned out to be extremely demotivating for the veterinarians. What is the reason for such adverse reactions to a drug that elsewhere in the world is well tolerated? Analyses of 16 different products from India and Nepal showed all of them having a high pH, a high osmotic pressure or both, thus being significantly different from European injectable formulations of meloxicam. Currently, a double-blinded study comparing representative products of Asian origin with a European product is ongoing in Nepal. The results should be available soon and will be published by the independent investigators in a peer-reviewed veterinary journal. Hopefully, 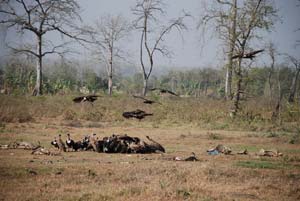 that publication will motivate local manufacturers to improve their synthesis protocols and thus create a product with better acceptance. - To enable the Indian pharmaceutical manufacturers to provide injectable meloxicam, its original manufacturer is no longer enforcing its patents in India. Moreover, an advocacy initiative taken by the British ‘Royal Society for the Protection of Birds’ in conjunction with their Indian partner, the ‘Bombay Natural History Society’, spearheaded by Dr. Nita Shah, is directed towards creating awareness for the need to protect vultures in both Government and public circles. Thus far, lobbying with decision makers in the government has resulted in important legal actions, including labelling human diclofenac formulations ‘not for veterinary use’. Major efforts are also directed towards the captive breeding of Asian vultures as well as providing the residual wild populations with safe, i.e. diclofenac-free carcasses (Figure 1). Those projects are making good progress and will hopefully help to bridge the time gap until diclofenac has been fully replaced by meloxicam. Figure 1. Vultures of different species feeding on a cattle carcass in a ‘vulture restaurant’ in Chitwan National Park, Nepal. The birds with the white collars are Oriental White-backed Vultures. Groups like this used to be very common across the sub-continent only 20 years ago. But what about the question asked at the onset, as to why meloxicam should prevent rabies? The reason for that statement is that feral dogs have filled the ecological niche opened by the decline of vultures. The numbers of dogs - and of dog bites - have increased markedly in India and, as a consequence, the incidence of rabies in humans, which had already been the highest in the world, is further increasing. By fostering the recovery of vulture populations and helping them to regain their role of the most effective scavengers, meloxicam could help to reduce the incidence of canine rabies transmission to people. Though the latter statement may be over-optimistic with the current rapid changes in Indian ecosystems, any measure that will prevent the extinction of Indian vultures is extremely important. Read more

Fast LC/MS/MS Analysis of Group 4 Pharmaceuticals from EPA-1694 with RRHD HILIC Plus Abstract The analysis of the Group 4 compounds in EPA-1694 is sped up using an Agilent 1290Infinity UHPLC and an Agilent ZORBAX RRHD HILIC Plus column. Excellent peakshape is found for all compounds, while the flow rate and sample throughput areincreased by four times the original rate. Introduction