Role of Dazzle / Bonton / Ranger in Management of CHIKUNGUNYA
Contents
What is CHIKUNGUNYA ?
 The dreaded disease caused by virus Aedes aegypti.
 Fever as high as 1020 F, arthalgia, arthritis, myopathy, tremendous weakness, skin rashes, mouth ulcers, etc are few of the  Intially seen in Maharashtra and Madhya Pradesh, now spreading to Karnataka, Tamil Nadu and other southern states.  The number of persons as high as 80,000, are affected, only in southern India, since December 2005. Medical Newsletter : Vasu Healthcare, Gujarat, India.

Role of Dazzle / Bonton / Ranger in Management of CHIKUNGUNYA
CHIKUNGUNYA
Source: Wikipedia, the free encyclopedia
Chikungunya virus
Virus classification
((+)ssRNA)
Togaviridae
Alphavirus
Chikungunya virus
Chikungunya is a relatively rare form of viral fever caused by an alphavirus that is spread by mosquito bites from the Aedes
aegypti mosquito The name is derived from the Makonde word meaning "that which bends up" in reference to the stooped posture
developed as a result of the arthritic symptoms of the disease. The disease was first described by Marion Robinson and W.H.R.
Lumsden in 1955, following an outbreak on the Makonde Plateau, along the border between Tanganyika and Mozambique in 1952.
Chikungunya is closely related to O’nyong’nyong virus.
Chikungunya is not considered to be fatal. However, in 2005-2006, 200 deaths have been associated with chikungunya on island and a widespread outbreak in Southe and Andhra Pradesh); see below. Symptoms: The symptoms of Chikungunya (also called as Chicken Guinea) include fever which can reach 39°C, (102.2 °F) a
olving the limbs and trunk, and arthritis affecting multiple joints which can be debilitating. Medical Newsletter : Vasu Healthcare, Gujarat, India.

Role of Dazzle / Bonton / Ranger in Management of CHIKUNGUNYA
Histopathological examination revealed perivascular lymphocyticis no specific treatment for Chikungunya. The illness is usually self- limiting and will resolve with time. Symptomatic treatment is recommended after excluding other more dangerous diseases. Vaccine trials were carried out in 2000, but funding for the project was discontinued and there is no vaccine currently available. A serological test for Chikungunya is available from the University of Malaya in Kuala Lumpur, Malaysia. Possible role for chloroquine in the treatment of Chikungunya: There is an interesting dialogue, mostly in French, about the possible use of chloroquine in the treatment of the arthralgia associated with CHIK. 1. A paper published in South Africa in 1984 concerning 10 cases of CHIK showed some effect of CQ in treating the symptoms of arthritis. Brighton SW. Chloroquine phosphate treatment of chronic Chikungunya arthritis. An open pilot study. S Afr Med J 1984 Aug The abstract of the paper: "Over 12% of patients who contract Chikungunya virus infection develop chronic joint symptoms. These symptoms respond only partially to the non-steroidal anti-inflammatory drugs. An open pilot study on the efficacy of chloroquine phosphate was carried out and 10 patients completed 20 weeks of therapy. Both the Ritchie articular index and morning stiffness improved significantly. In the patient's assessment, 7 out of 10 considered their conditions to have improved. On the basis of the doctor's assessment, 5 of the 10 had improved. These results justify further controlled blind trials of chloroquine in chronic Medical Newsletter : Vasu Healthcare, Gujarat, India.

Role of Dazzle / Bonton / Ranger in Management of CHIKUNGUNYA
Treatment (of Chikungunya):
Supportive care with rest is indicated during the acute joint symptoms. Movement and mild exercise tend to improve stiffness and morning arthralgia, but heavy exercise may exacerbate rheumatic symptoms. In unresolved arthritis refractory to aspirin and nonsteroidal antiinflammatory drugs, chloroquine phosphate (250 mg/day) has given promising results." From the French government (in French):
Rough translation: "In the context of the search for molecules with activity against the Chikungunya virus, lab tests on cell cultures in vitro have shown that chloroquine (NivaquineR) has some antiviral activity against this virus. The French Agency of Health and Medicines Safety (AFSSAPS) points out that this involves preliminary tests and that at this stage, no information on the efficacy or safety in humans is available. In this context, the Agency reiterates the conditions of proper usage of Nivaquine (CQ ). Nivaquine/ CQ is indicated primarily for the prevention and treatment of malaria. It is also used in the symptoms of rheumatoid polyarthritis and of lupus. The use of this medication requires a prescription". (The rest of the statement reminds users of the hazards of over dosage with Following a recent outbreak (2006) of the disease in Southern India, several homeopathy practitioners in the region have been handing out medicine that is supposed to prevent the disease. However, there have been no scientific studies to confirm the effectiveness of homeopathy against Chikungunya. Medical Newsletter : Vasu Healthcare, Gujarat, India. 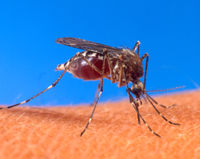 Role of Dazzle / Bonton / Ranger in Management of CHIKUNGUNYA
Epidemiology
Chikungunya was first described in Tanzania, Africa in 1952. An outbreak of chikungunya was discovered in Port Klang in Malaysia
in 1999 affecting 27 people.
Recent outbreaks
In February 2005, an outbreak was recorded on the French is in the Indian Ocean. As of May 18, 2006, 258,000 residents have been hit by the virus in the past year (out of a population of about 777,000). 219 official deaths have been associated In neighboring Mauritius, 3,500 islanders have been hit in 2005. There have also been cases in Madagascar, Mayotte and the Medical Newsletter : Vasu Healthcare, Gujarat, India.

Role of Dazzle / Bonton / Ranger in Management of CHIKUNGUNYA
In 2006, there was a big outbreak in the Andhra Pradesh state in India. The initial cases were reported from Hyderabad and Secunderabad as well as from Anantpur district as early as November and December 2005 and is continue unabated. In Hyderabad alone an average practioner sees any where between 10 to 20 cases every day. Some deaths have been reported but it was thought to be due mainly to the inappropriate use of antibiotics and anti inflammatory tablets. The major cause of morbidity is due to severe dehydration, electrolyte imbalance and loss of glycemic control. Recovery is the rule except for about 3 to 5% incidence of prolonged arthritis. As this virus can cause thrombocytopenia, injudicious use of these drugs can cause erosions in the gastric epithelium leading to exsanguinating upper GI bleed (due to thrombocytopenia). Also the use of steroids for the control of joint pains and inflammation is dangerous and completely unwarranted. On average there are around 5,300 cases being treated everyday. This figure is only from public sector. The figures from the private sector combined would be much higher. There have been reports of large scale outbreak of this virus in Southern India. At least 80,000 people in Gulbarga, Tumkur, Bidar, Raichur, Bellary, Chitradurga, Davanagere, Kolar and Bijapur districts in Karnataka state are known to have been affected since A separate outbreak of Chikungunya fever was reported from Malegaon town in Nasik district, Maharashtra state, in the first two weeks of March 2006, resulting in over 2000 cases. In Orissa state, amost 5000 cases of fever with muscle aches and headache were reported between February 27 and March 5, 2006 In Bangalore, the state capital of Karnataka (India), there seems to be an outbreak of CHIK now (May 2006) with arthralgia / arthritis and rashes. So also in the neighboring state of Andhra Pradesh. In the 3rd week of May 2006 the outbreak of Chikungunya in North Karnataka was severe. All the North Karnataka districts specially Gulbarga, Koppal, Bellary, Gadag, Dharwad were affected. The people of this region are hence requested to be alert. Stagnation of water which provides fertile breeding grounds for the vector ( Medical Newsletter : Vasu Healthcare, Gujarat, India.

Role of Dazzle / Bonton / Ranger in Management of CHIKUNGUNYA
oided. The latest outbreak is in Tamil Nadu, India - 20,000 cases have been reported in June 2006. Earlier it was found spreading mostly in the outskirts of Bangalore, but now it has started spreading in the city also (Updated 30/06/2006). More that 300,000 people are affected in Karnataka as of July 2006 Reported on 29/06/2006, Chennai - fresh cases of this disease has been reported in local hospitals. A heavy effect has been reflected in south TN districs like Nagercoil. Residents of Chennai are warned against the painful disease. As of July 2006, nearly 50,000 people were affected in Salem, Tamil Nadu As of July 24, there are several cases of Chikungunya have been found in Madhya Pradesh too. Analysis of the recent outbreak has suggested that the increased severity of the disease may be due to a change in the genetic sequence, altering the virus' coat protein, which potentially allows it to multiply more easily in mosquito cells Medical Newsletter : Vasu Healthcare, Gujarat, India.

Role of Dazzle / Bonton / Ranger in Management of CHIKUNGUNYA
ROLE OF DAZZLE IN TREATMENT OF SYMPTOMS OF CHIKUNGUNYA:
Dazzle Capsules:
 As it is the condition involving arthralgia and mild arthritis, the role of Dazzle is very important. Shallaki Guggul and Nirgundi in Dazzle have excellent anti inflammatory and analgesic action. This will give relief from arthralgia and arthritis associated  Ashwagandha in Dazzle works as anti-oxidant that takes care of free radical induced during viral condition Chikungunya.  Ashwagandha is also well-known rejuvenator in sever illness and debility associated with viral condition like Chikungunya.  Maharasnadi Churna in Dazzle works as mild diuretic that takes care of accumulation of fluid generally associated with  As such there are no trial data available in this specific condition, clinical response of Dazzle in symptomatic management  The normal recommended dose is 1 to 2 capsules two times a day after meals. Medical Newsletter : Vasu Healthcare, Gujarat, India.

Role of Dazzle / Bonton / Ranger in Management of CHIKUNGUNYA
ROLE OF BONTON IN TREATMENT OF SYMPTOMS OF CHIKUNGUNYA:
 Bonton is a preparation for healthy bones general pain and cramps associated with bone following viral condition of  Abha Guggal, Laxadi Guggal, Kishor Guggal are well known for healthy osteoblast activity and enhance osteogenesis and  Madhu Malini Vasant, Kukkudantvak bhasma, praval bhasma and pushpadhanva Ras work as natural source of calcium  All of these ingredients promote healthy bone tissue so as to take care of pain related to bones.  These also take care of inflammation of bones.  All of the above benefits help patients suffering from Chikungunya by getting relief from arthralgia, severe muscle pain, weakness of bones and muscles and offer sense of wellbeing.  The normal recommended dose, 1 to 2 capsules a day after meals. Medical Newsletter : Vasu Healthcare, Gujarat, India.

Role of Dazzle / Bonton / Ranger in Management of CHIKUNGUNYA
ROLE OF RANGER IN TREATMENT OF SYMPTOMS OF CHIKUNGUNYA:
Capsules and Syrup:
 Ranger is a natural body rejuvenator and antioxidant.  Shatavari, Kavchabeej, Bhringraj, Trifla and Varahikand and natural enhancers for body’s normal metabolism process and normalize cellular bio-chemical functions.  Gokshurak is specially included for maintaining health of kidneys.  Trikatu, Chaturjat, beejband etc help in maintaining health of vital organs like liver, lungs, kidneys etc, thereby bringing about normalcy of health at the earliest.  Aswagandha also has a powerful function as anti stress activity.  Any disease has the stress effect of body’s vital organs which further hampers reurn to normal health.  Thus all the ingredients of Ranger fight with stress of Chikungunya and restore normal health promptly  1 cap BID for 15 days, followed by 1 OD as maintenance dose  Ranger Syrup: 2 teaspoonfuls two times a day. ALL OF OUR PREPARATIONS ARE MADE FROM PUREST HERB EXTRACTS AS PER RIGOROUS QUALITY STANDARDS
AND SYSTEMS BASED ON ISO 9001
Medical Newsletter : Vasu Healthcare, Gujarat, India.