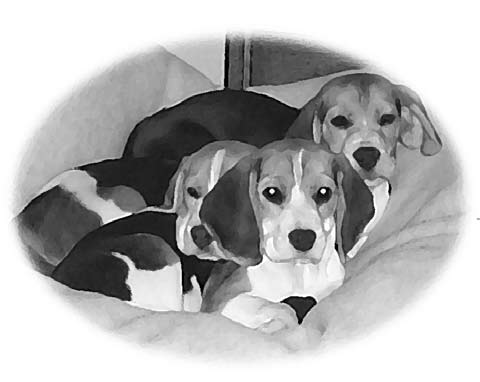 pers will be later discarded. No smelly towels to wash after the whelping is completed. The bitch was returned to the whelp-ing box where she began to clean and put herself back into order. A bit of Nutri-cal was squeezed from the tube onto the tip of my finger and Our thirteen inch beagle bitch, Char- She did not show any maternal concerns on the due date — just the usual smile and the wag of the tail. No as “7:50, ‘male, dark face,’ eleven Beginning five days prior to the due daily under the pine trees where she scissors, towel, electrolyte, Nutri-cal, could be alone in the quiet. Several yogurt, baby scale, folding table, weight times during the day she was looked chart, and pencil were placed at the A lawn chair was pulled up for a long was brought inside to sleep in the utility num reflector above the pen to warm At 7:30 p.m. the first bubble appeared. About ten minutes later the head ap- one corner of a 4’ x 4’ exercise pen. delivered alone as she had done with Both were placed inside a specially her first litter, but my wife, Donna, and made, slightly larger than 4’ x 4,’ galva- I thought that we would help the process before 9:00 p.m. The procedure was very similar to that of the first puppy. wall extending around the edge — to table. Donna held the head of the bitch and offered her comfort and consolation. “9:00, female, ‘white to left on neck,’ inside the nesting box for the anticipated out. (I like to think of the motion as be- ing much like a “comma” on the printed Back to the lawn chair where I fell She had whelped her first litter, two have recently added a “side to side” mo- Just before ten o’clock I heard the at all, so it was felt that a veterinarian tion to the procedure so as to aid in the release of the alternating shoulders. The bitch was permitted to eat a small Now it was the fourth day after the portion of the first afterbirth. (Eating of additional afterbirths is not encouraged.) in the difficult position for some time.
The umbilical cord was cut with the The bitch was placed on the table and About an hour after the local veteri- time a towel was placed around the time the injection was not considered.
“2:30, female, ‘full collar, spot by tail,’ At 2:30 I happened to awake to see a breath was exhaled into the mouth of the puppy still in the amnionic sac with cord Just before daylight, a fifth whelp Is That An Outstanding Puppy?
When evaluating puppies, one of the puppies must stand out from all the others. If you have to ask your wife (or husband) his (or her) opinion, it is not an outstanding puppy. If you have to ask your friends which puppy they like, there is not an outstanding puppy in the litter.
If you think the puppy in question MIGHT develop, it is not an outstanding If you think the puppy in question might GROW OUT OF his problem, it is If there is an outstanding puppy in the litter, there is no doubt about it. There is no need to ask the opinion of anyone else.
Some judges pick the winner as he (or she) enters the ring. There is no doubt about it. The judge must still go through the accepted measures to validate his original opinion (and follow AKC procedures.) I often asked the opinion of BJ Orseno when attempting to select a puppy from a particular breeding. She always had a “good eye” for good beagles and was always very helpful. One day I saw her at a show. I told her that her expertise was not needed in selecting a puppy from a particular litter. I knew for sure, one of the puppies was outstanding. That selection won several groups a Best In Show and was the number one bitch in the nation.
Quite some years ago, Bob Henry, Sunnymede Beagles, Ft. Wayne, IN was looking at about 25 puppies running freely about the back yard. In about two min- utes he reported, “I want that one.” That One earned 13 points in one Wisconsin Tony Leahy, MFH (foxhounds) keeps fifty-three and a half couple (not 107) of hounds (not dogs). Leahy talked about his canines in a December issue of Co- vertside. When asked how he selects puppies from his “five to seven” litters each year, he replied, “I want them to be outgoing, friendly, active, playful.and I want to add.intelligent.” When asked what percentage of each year’s young entry do you expect to be still in the pack in their fifth season, Leahy replied, “One hundred percent, barring injury or other external factors.” Years ago I shared a litter of seven puppies with a young lady in Florida. I selected a puppy; she selected a puppy; I selected a puppy; she selected a puppy, and so on until all the puppies were removed form the exercise pen but for one red and white male. He stood alone. Four square. Head up. Tail up. Intelligent expression. Great balance. Beautiful head. Strong topline. Adequate bone. It was agreed by all the silent spectators that the red and white male was the best of all. By far. No doubt. He was selected last only because of color. The red male later received group firsts from the puppy class.
A really outstanding puppy needs no discussion, photo, standard or anatomical drawing. Everyone can pick the good puppy.
was identified as “10:45, male, ‘spot on back of neck,’ attached and lying to the rear of the rest- Copyright by show Beagle Quarterly
ing bitch. Cold. No motion. I cleared 2007 and in perpetuity. No portion may
Often a cc of oxytocin is administered be reproduced without permission.