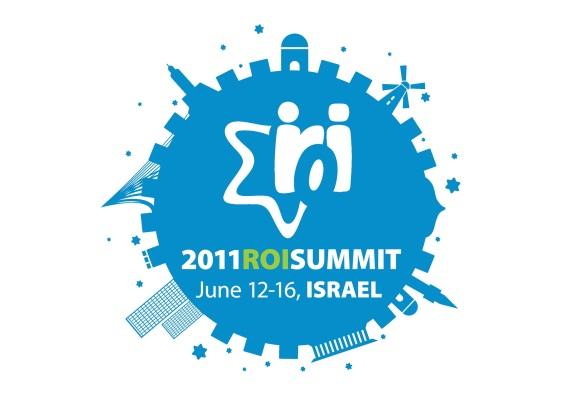 For a video enhanced, resource rich version of this press release clic Connecting to Create the Jewish Future
Young Social Innovators Will Collaborate at Global Summit in Jerusalem to Transform
the Jewish World and Beyond
Jerusalem -- (June 2, 2011) As cyber-activism and Facebook revolutions sweep the Middle East, 150 Jewish social and business entrepreneurs, technology whizzes, thinkers and artists from Hong Kong to Zagreb, Sao Paulo to San Francisco, and Melbourne to Beersheva, will converge on Jerusalem for the ROI Global Summit of Young Jewish Innovators, to connect and create new tools and novel approaches to shape the Jewish world and beyond. ROI Community is an international network of 600 social entrepreneurs and Jewish innovators in 40 countries on six continents who are creating innovative ways to connect to Jewish life. “These young Jewish social entrepreneurs are transforming the Jewish world through their vital initiatives and commitment to tikkun olam, repairing the world,” saihe American Jewish philanthropist who, in 2005, created ROI Community as a partnership wit “As change agents within their own communities, in Israel and beyond, these 20- and 30-somethings are key to ensuring the vibrancy of Jewish life 3,000 years down the road.” Keynote speaker Marina Nemat, whose best-selling memoir Prisoner of Teheran recounts the torture she endured while imprisoned by the Khomeini regime as a teenager, will address human rights and the revolutions sweeping the Middle East. Opening keynoter Daniel Birnbaum, who, as CEO, oversaw Israel’s biggest IPO in 2010 for start-up SodaStream International, will share how building a corporate culture grounded in environmental responsibility boosts business. And, in conjunction with the Jerusalem Season of Culture, world-renowned video artist Kutiman will unveil a new piece inspired by Jerusalem during the ROI Global Summit. At the heart of the program is peer-to-peer training and collaborative project-building lead by ROI network members from around the world. In addition, some of Israel’s most successful entrepreneurs and thought leaders will teach Master Classes, to inspire the ROIers with their personal stories and insights for effecting change. Among the dozen Master Class teachers will be Yossi Abramowitz, president of the newly formed Arava Power Company and Jewish educator/activist; Independence Party MK Einat Wilf, a Cambridge PhD and former Senior Fellow at the Jewish People Policy Planning Institute, who serves on the Foreign Affairs and Defense, Education and House committees; and, Rachel Azarya, the youngest Deputy Mayor of Jerusalem. ROI Community has played a key role in seeding and supporting such cutting-edge Jewish start-ups aROI also offers an expansive Micro Grants program to help ROI members turn ideas into actual meaningful projects. “ROI Community creates a space where connection and innovation happens,” said Justin Korda, ROI Community Executive Director. “Our ultimate goal is to link up dynamic, creative young Jews, enabling them to translate their ideas into initiatives that bring the joy of Jewish life to Jews around the world and impact the world around them. Ultimately,
we envision a thousand-strong network of innovators engaging a million people in diverse forms of Jewish life.”
This year, ROI Community selected a cadre of individuals who are creating ripples of change in their own right. Among
the 150 ROIers who will participate in the Jerusalem Summit:
a superstar in Jewish entertainment, sings the music of her late father, the legendary Shlomo
Carlebach, and her own compositions. In addition, she has achieved a unique sound by partnering with The Green Pasture
Baptist Church Choir and garnered six Grammy mentions for her album “Higher.” Her music brings together different
faith communities to overcome intolerance and promote healing. Her latest project ishere her concert
proceeds fund those in need, like the victims of Hurricane Katrina in New Orleans.
inspired by Hillel’s dictum, “If I am not for myself, who will be for me?” fin 2009, a
web-savvy LGBT rights organization that engages friends – straight and gay – to overturn discriminatory laws. On the
basis of their sexual orientation, gay people can be fired in 29 American states, evicted from their home in over 30 states,
and denied over 1,100 rights and privileges that marriage confers on straight couples. On May 4, Friendfactor launched a
new initiative to lobby New York state government on marriage equality.
sraeli celebrity gastronome and food journalist, is a judge on FOX TV’s MasterChef and Israel Channel
2’s prime time show, MasterChef Israel. She established the popular Shuk Hanamal, The Indoor Market at the Tel Aviv
Port, Israel’s first green commercial building, an expansive food market which gives Israelis direct access to local
farmers’ fruits, vegetables and products of the land.
a theater director and designer in Jerusalem, sits on the Board and heads programming for
hich was founded by alumni of the leading national religious yeshivot and pre-military
academies to create an accepting space for Orthodox Israeli gays and sensitize the broader Israeli Orthodox community to
the desire of this group to be integrated into Orthodox life without prejudice. Google Israel is sponsoring Havruta’s float
in the Tel Aviv Pride Parade on June 10, 2011.

ho discovered she was Jewish at age 15, has become a key figure in the renaissance of Poland’s young
Jews. Anna helped launch Warsaw’s vibrant Moishe House and leads nearly 1,100 Jewish activists as president of the
Polish Jewish Youth Organization. This summer, she’s adding a new dimension to the renowned Cracow Jewish Festival
by inviting top young Jewish leaders from Belgium, France and Switzerland, among others, to brainstorm about
contemporary Jewish life. In September, she’ll be the first Polish Jew to run for the directorate of the European Union of
Jewish Students. She’s also writing her thesis on post-traumatic stress disorder among third generation Holocaust
survivors for a degree in clinical psychology.

is director of the Three Faiths Forum (3ff) in London, one of England’s largest interfaith
organizations. The UN awarded two prizes to 3ff for intercultural innovation. The 3ff Middle East, based in Jerusalem,
engages Muslims, Christians and Jews through joint text study of the Tanakh, New Testament and the Koran.
ho moved to Beit Shemesh, Israel from the UK, co-founded Sviva Israel with her husband to change
how Israelis and Jews relate to their Jewish environmental identity. They developed Eco Campus, after Sviva Israel won
the Microsoft Israel R&D Community VC contest. Today, Eco Campus is the largest global Jewish environmental school
network integrating Web 3.0 technology. Tamar was the only Israeli participant in a US State Department program for
using new media technology to create change in civic society.
New York, won a 2011 Jewish New Media Innovation Fund Award for his Jewish Journey Connector Project. Like Amazon and Netflix, The Connector is an intelligent database with a predictive modeling algorithm that creates comprehensive profiles of individuals to link young adult Jews to Jewish opportunities and experiences that match their interests and needs. is a mechanical engineer in Rosario, Argentina. In 2009, he founded STS Rosario, along with fellow ROIer Gabriel Weitz, to tackle issues of renewable energy sources and sustainable transport. Simon is now working on a project to “green” Argentina’s Jewish institutions. a stand-up comedian, walked across the Sudanese desert to immigrate to Israel at the age of eight. Over the last few years, Shmuel has begun making waves across seas of communities and styles. He is bringing humor, entertainment and unique cultural flavors to audiences both young and old. Shmuel studied political science and theater at Haifa University. Shmuel had stints at the prestigious Habima Theater in Tel Aviv and at the IDF Theater. Performing in Hebrew and Amharic, his one-man show, Milah Shel Etyopi, is on stages across Israel. His script and directorial debut for the film Zrubavel won The Haifa International Film Festival award for Best Drama in 2008 and in Sicily, Zrubavel claimed the Special Jury Prize at the Taormina Film Festival. irector of social media and a senior staff writer for Lubavitch.com, is the director of the digital voice for Chabad-Lubavitch Headquarters News. In November 2008, he set up Chabad's social media platform. Just a week later, that platform, still in its infancy, became key to keeping the world informed about the unfolding terrorist attack on the Mumbai Chabad House. Since then, the platform has given a human voice and presence for Chabad's outreach efforts on social media. Recently, it was used to disseminate information and updates about Japan’s Jewish community following the March 2011 tsunami as it had in the Christchurch, New Zealand, earthquake the previous month. To learn more about ROI participants from your community Contact: Sara Averick, Israel: 052-867-4966 orJose Rosenfeld, Israel: 052-287-7646 or Toby Dershowitz, USA: 202.250-6104 or

Professor Ann M Mortimer Curriculum Vitae: Second Opinions for NAViGO Professor Mortimer studied medicine at the University of Leicester. She completed an intercalated BSc degree by research into biochemistry and genetics in 1978. She qualified MB ChB in 1981. Professor Mortimer trained in psychiatry in York and Leeds, including a post as Lecturer with Leeds University. Professor Morti