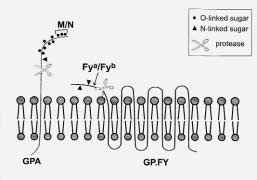 A review: modification of the
red blood ce ll membrane and its
application in blood group
serology
Key Words: red cell antigens,enzymes,modification of
able for use in the blood bank. These included plant- derived proteases: namely, papain extracted frompapaya, ficin extracted from figs, and bromelin extracted Introduction
from pineapples: and pronase which was isolated from Blood group antigens are carried on proteins and car- the culture supernate of Streptomyces griseus (reviewed bohydrates located on the extracellular surface of the red blood cell (RBC) membrane.The RBC membrane is Proteases have been traditionally used to enhance composed of a lipid bilayer, through which a number of detection of Rh and Kidd system antibodies, enhance- proteins pass or are anchored. Proteins bearing blood ment that results primarily from cleavage of sialic acid- group antigens vary widely in their structure and func- bearing glycophorin A and glycophorin B. However, the tion. Some proteins (e.g., glycophorin C, band 3) are expansion of knowledge regarding the proteins that anchored to the intracellular membrane skeleton and bear the different human blood groups has made the play a role in maintaining red cell shape and integrity; action of proteases more valuable in routine serologic others are transport proteins for specific molecules tests. Proteases cleave proteins at defined sites along a (e.g., urea transporter, channel-forming integral protein), linear peptide sequence, and as such may be used to and other proteins are receptors (e.g., the LW, Lutheran modify the RBC antigen expression. Blood group anti- and Fy glycoproteins) and play a role in cell–cell inter- gens that are above the enzyme cleavage site on a pro- tein will be removed following treatment of the RBCs Blood group antigens may be simple linear sequences of amino acids (with or without any associated sugarmolecules), or may be formed by the secondary and/ortertiary conformation of the protein.Antigens such as A,B, H, I, and P are entirely carbohydrate, but the oligosac- charides on which they are carried are attached to pro-teins and lipids of the RBC membrane.
Proteins may be modified by the action of certain enzymes and chemicals.The action of different modifierson proteins that carry blood group antigens may be usedselectively in antibody identification and may eliminatethe need to test rare RBCs.
Proteases have been used in blood group serology since 1947, when Morton and Pickles showed that Fig. 1. Effect of proteases: Antigens located above an enzyme-
enzyme solutions obtained from culture extracts of cleavag site will be removed when RBCs are treated Vibrio cholerae (sialidase) or from hog stomach with enzymes. Much of the sialic acid on the RBC also will be removed by protease treatment as these oligosaccharides are (trypsin) could be used to enhance agglutination reac- attached to the N-terminal portions of the glycophorins A, B, and tions. Other sources of proteases were shown to be suit- 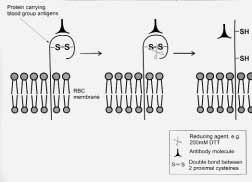