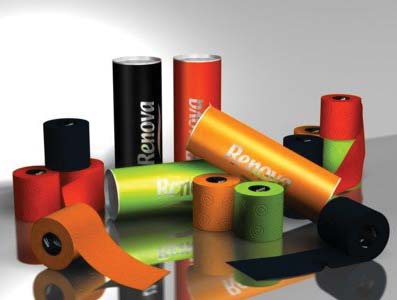 For the first time in 30 years the tissue market in Europe is starting to falter,especially at the consumer level. So European tissue makers, in an effortto win back market share, are looking at innovative ways to enticeconsumers, even to the extent of producing pricey toilet tissue in a varietyof colors. By David Price
In the January/February issue of this magazine,
P&G in a corporate press release blamed “ .slow Harold Cody wrote how well the U.S. tissue market was per- growth and fierce competition from private labels.” The forming. Over here (Europe) things are changing. The Away- company has stated that its future will be in higher margin From-Home (AFH) market is sound due to corporate and pub- businesses like health care and beauty. But Citigroup lic purchasing policies, but consumer grades are not. What’s analyst, Wendy Nicholson, wonders what this decision will more, the European tissue market is losing its U.S. players. P&G mean for the remainder of P&G’s tissue and towel business.
has sold or licensed its European operations to SCA for EUR The market is tough due to the usual suspects: high input 500 million, and Koch is planning to sell GP’s businesses in the costs, high energy prices, retailer competition and customer That special feeling.
Portuguese tissue maker
Renova produces toilet paper rolls
in four colors, which are said to
be soft and silky, and cost enough
to make you feel special.
below the company’s 23.5% benchmark. In contrast, SCA is changing table and the EasyMeal, a disposable bib. The most happy with a margin of 12%, but would prefer to notch it up exotic response is an up-market toilet tissue by Renova of Portugal, who has produced an embossed black tissue roll, to PaperAge
be followed by orange, green and red brands.
The manager of K-C’s European operations, Alberto P&G’s partial withdrawal from Europe is also accompa- Cappellini, was more specific. He said, “Consumers’ needs in nied by its willingness to work with private equity (PE) Europe are getting more complex as demographics rapidly firms. Clayt Daley, P&G’s CFO, told the Times of London change and people take increasing personal control of their (8 March ‘07) the company could team up with PE to lives.” In plain language European consumers are prepared to complete what he calls a “standalone” acquisition. “If a go for lower quality if the Euro goes further. But the retailers “Consumers’ needs in Europe
are getting more complex as
demographics rapidly change
and people take increasing
personal control of their lives.”
to Eastern Europe, Russia and China.
A few days later, Thomas Falk, CEO of K-C, also spoke to demand in E. Europe and Russia will reach 7%, while China the Times (11 March ‘07). Falk made the point that K-C has will see 8%. Western Europe will be a modest 3% and North three global brands with a billion dollar status: Huggies, Andrex and Kleenex. He said the company is moving into toi- Admittedly, these emerging markets start from a low base letries—right onto P&G’s lawn. But like all tissue makers, K- rate, but as expectations and living standards rise, growth will C is locked into a desperate drive for innovation as commod- ity suppliers nibble at its margins and profits dip. “I don’t David Price is a contributing writer for PaperAge. He can be sleep well at nights unless I see the next three generations of our products. We are trying to bring innovation to all our cat- PaperAge