The first World Conference on Breast Cancer acknowledged that higher levels of estrogen increased the risk of breast cancer. 27 out of 31 studies have found that even one abortion can increase the risk of developing breast cancer. Having a first child before the age of 18 years reduces the breast cancer risk dramatically. In first trimester miscarriages, the estradiol (estrogen) levels are usually at non-pregnant levels. When a woman has an abortion, she has more cancer-vulnerable cells in her breasts than before pregnancy and exposes herself to increased risk of breast cancer. In a full-term pregnancy, lactating breasts leave fewer cancer-vulnerable cells in her breasts than before pregnancy. Scientists and researchers have collected data since 1957 that indicates early abortion is a risk factor for breast cancer, yet this information is not well known to the public, nor is it acknowledged by many medical associations and journals. Those making the claim say there are two ways in which abortion is linked to breast cancer. Firstly, women who begin bearing children at a young age are less likely to get breast cancer than those who have children later in life, or those who have no children at all. A World Health Organisation (WHO) study reported: "It is estimated that women having their first child when aged under 18 years have only about one-third the breast cancer risk of those whose first birth is delayed until the age of 35 years or more."1 Secondly, 27 out of 31 epidemiological studies worldwide have found that having even one induced abortion increases the risk of getting breast cancer later in life. 2-32 The increased risk from abortion is apparently in addition to the risk from delaying a woman's first childbirth. Following the first World Conference on Breast Cancer in July 1997 a Global Action Plan Report was published which acknowledged that higher levels of estrogen increased the risk of breast cancer. It said: "Prolonged use of the birth control pills, late or lack of pregnancies and breast-feeding, induced termination of pregnancies, a diet high in fat, meat or dairy products, and hormone replacement therapy following menopause, are all cited as risk factors for increased estrogens and breast cancer." Read more about the World Conference here. 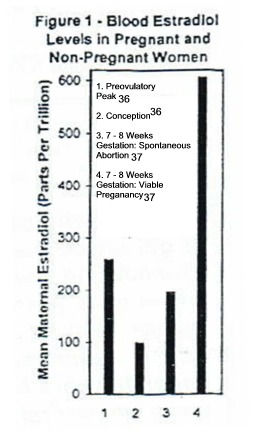 At puberty, the hormone estrogen is what causes the changes in a female that turns her body from a girl to a woman. The most important estrogen is called estradiol and it is so powerful that its concentration in a woman"s blood is measured in parts per trillion. After puberty, the levels of estrogen rise and fall twice with each menstrual cycle. The ovaries secrete ever larger quantities of estradiol, reaching a peak about one day before ovulation. This peak before ovulation is the highest blood level of estradiol a woman will ever normally experience when she is not pregnant. After ovulation larger quantities of estradiol and the pregnancy hormone progesterone, from which estradiol is made, are secreted. About a week after ovulation, unless the egg has been fertilised (i.e. conception has taken place), the hormone levels soon return to normal. If conception has occurred, the embryo begins - almost immediately - to produce a chemical messenger which "rescues" the corpus luteum (the hormone-secreting body). If conception has not taken place, the corpus luteum essentially dies and the endometrium (the uterine lining of the womb) is shed as the menstrual flow or menses. Conception If, however, conception has occurred and the corpus luteum has been rescued, it starts producing enormous concentrations of progesterone and estradiol. Significantly elevated levels (compared to non-pregnant levels at the same time of the menstrual cycle) of estradiol can be detected as early as 5 days after conception.33 By 7-8 weeks gestation (after the last normal period) a pregnant woman"s blood already contains six times more (i.e., 500% more) estradiol than it did at the time of conception, more than twice the highest level attained in the non-pregnant state (preovulatory peak).(See Fig.1) In marked contrast, pregnancies destined to abort spontaneously (i.e., end in micarriage) during the first trimester usually do not generate estradiol in quantities exceeding non-pregnant levels.34,35 One team of Swiss obstetricians, as far back as 1976, was actually able to predict spontaneous abortions with 92% accuracy with just a single measurement of estradiol. 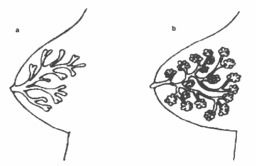