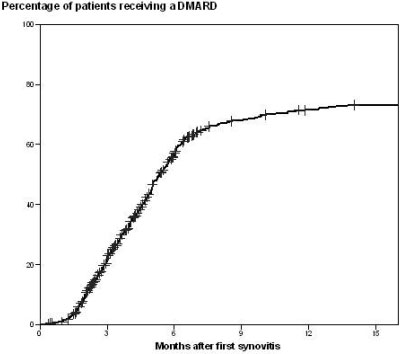 RADIOGRAPHIC BENEFIT FROM VERY EARLY DMARD START analyzed and the group of 152 patients who were Baseline characteristics of the patients who were and those who were not treated with disease-modifying antirheumatic drugswithin 3 months after the onset of synovitis* Overall, 527 (79.7%) of the 661 analyzed patients were started on DMARD therapy within 1 year follow- ing symptom onset. Methotrexate was the most com- monly prescribed first DMARD (336 of 527 [64%]),either as monotherapy (307 of 527 [58%]) or in combi- nation with other DMARDs (hydroxychloroquine, sul- fasalazine, leflunomide, or TNF-blocking drugs) (29 of 527 [5.5%]). Sulfasalazine was chosen in 66 patients (13%), and leflunomide in 31 patients (6%). DMARDs not taken into account in our analysis (mainly hydroxy- chloroquine monotherapy) were prescribed in 90 pa- Time to DMARD initiation was very hetero- geneous, as shown in Figure 1. The proportion ofpatients starting DMARD therapy increased rapidly treatment among patients starting DMARDs later may over the first 6 months and leveled off thereafter. Of the have worked against such a bias. Combination therapy 437 patients who started a DMARD of interest for the was rarely chosen, which makes it unlikely that differ- present study, 140 (32%) did so within the first 3 months ences in the usage of combination therapy had an ef- after symptom onset, and 205 (47%) within 6 months.
Baseline characteristics of the patients who began treat- Radiographic progression. The mean Ϯ SD total
ment within 3 months and those who did not begin SHS at baseline was 5.8 Ϯ 7.8 (range 0–56), with a treatment within 3 months are reported in Table 2. An median score of 3 and an interquartile range (IQR) of imbalance in the type of DMARD treatment used may 1–7.5. The rather high baseline values in some patients theoretically have had an impact on radiographic pro- appear surprising, but they are seen more frequently in gression. However, we did not identify such an imbal- cohorts of patients with short symptom duration. There ance. The somewhat higher frequency of TNF blockade may be several reasons for this: early subclinical jointinflammation that is not recognized by the patient,inaccurate symptom recall, and associated osteoarthritisthat may cause damage resembling erosions and jointspace narrowing in RA. The median radiographic pro-gression at 1 year was 0 (IQR 0–1) and the mean Ϯ SDchange was 1.5 Ϯ 4.3 units (range 0–36). Most patients(72%) did not show any radiographic progression over 1year, but 8% had severe progression (Ն5 units). Theerosion score at baseline was 2.8 Ϯ 4.7 (range 0–40).
Change in the erosion score at 1 year was observed in179 patients (27.1%). The mean change in the erosionscore was 1.2 Ϯ 3.5 units (range 0–37). When patientswere grouped according to whether they did or did notbegin DMARD treatment within 3 months of symptomonset, the difference in crude mean radiographic pro-gression was not significant (1.2 Ϯ 3.4 units [range 0–19]in patients starting DMARDs within 3 months and 1.6 Ϯ4.5 units [range 0–37] in patients starting DMARDslater [P ϭ 0.37]).
Intraclass correlation coefficients were Ͼ0.99 for both radiographic status scores and radiographic change Figure 1. Percentage of patients starting disease-modifying antirheu-
scores. The smallest detectable change was calculated at matic drug (DMARD) treatment, by amount of time since the onset ofsynovitis.

Figure 2. Percentage of patients starting disease-modifying antirheumatic drug treatment
within 3 months of synovitis onset, by propensity score quintile (Q) (higher quintiles reflect
greater disease severity).
Findings of the propensity analysis. In the final
Findings of sensitivity analysis. Additional ana-
logistic model, the investigation center, DAS28 score, lyses, conducted in order to test the robustness and time to first rheumatologist visit, RF positivity, involve- validity of the approach, yielded similar conclusions. The ment of Ͼ3 joint groups, CRP level, and anti-CCP conclusions were unchanged when corticosteroid use antibody positivity remained as contributory factors was one of the factors included in the propensity model (listed in decreasing order of contribution). Age, sex, or when only specific DMARDs were used to define presence of erosions, comorbidity, symmetric arthritis, early treatment start. Taking as a minimum the use of at and involvement of hand joints were not contributory in least 7.5 mg/day prednisone equivalent for Ͼ3 months in the model. Subsequently, in order to investigate whether the first year of disease, the estimated marginal means the perceived disease activity and severity were influenc- for the change in radiographic progression score were ing the crude differences in radiographic progression similar to those obtained in the original propensity rate, the propensity score was included as a covariate in analysis (0.6 SHS units versus 1.8 SHS units in patients the linear regression analysis. The estimated marginal who did versus those who did not start DMARD treat- means were 0.8 units (SEM 0.37) in patients starting ment within 3 months; P ϭ 0.008). When the propensity DMARDs within 3 months and 1.7 units (SEM 0.19) in score was based on the start of only methotrexate and/or patients starting DMARDs later (P ϭ 0.033), thus anti-TNF, and not the other DMARDs of interest, confirming the difference found in the crude analysis.
within 6 months, radiographic progression was also (SEM is reported here because it is the estimation lower in patients who had started treatment within 3 provided in a generalized linear model.) Subsequently, months versus those who had started later (0.9 SHS units patients were divided into propensity quintiles (Figure versus 1.6 SHS units), although the difference was not 2). As expected, the proportion of patients starting statistically significant (P ϭ 0.11). Other approaches to DMARDs early increased by increasing quintile (in- determining the propensity score (such as the inclusion creasing prognostic severity), although only 37.6% of of the baseline SHS score instead of the presence or patients in the highest quintile (worst prognosis) started absence of erosions) also resulted in similar conclusions.
DMARD treatment within 3 months of the onset ofsynovitis.
DISCUSSION
Figure 3 shows probability plots of individual radiographic progression scores by DMARD treatment The results of this study add to the sparse evi- start (early versus delayed) in the individual quintiles. In dence that starting DMARD treatment very early in the first 3 quintiles (better prognosis) there were no patients with inflammatory arthritis is favorable with important differences in radiographic progression be- regard to radiographic progression. A trend appears to tween those who started DMARDs within 3 months and suggest that especially patients with a relatively unfavor- those who started DMARDs beyond 3 months. A trend able prognosis benefit from early initiation of treatment.
suggesting benefit of early treatment, especially in pa- This observation must be interpreted with caution in tients in the the fourth and fifth quintiles (worse prog- view of the limited sample size and short followup period in the present study. However, it is in accordance

OHE350 Welding HelmetThe professional helmet for the industrial welderDescription The Linde OHE350 is a high quality, competitively priced electronic welding helmet for use in arc welding. The OHE350 is built to exacting professional standards and is designed for industrial welders who weld infrequently. It provides complete, reliable protection and is also lightweight and extremely comforta