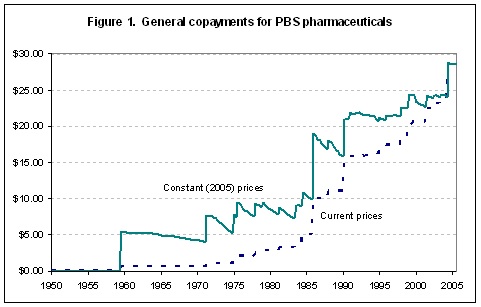 processes. Its concern has become a narrow financial focus on its own outlays – in this casePBS subsidies. If it can achieve budgetary savings through cost-shifting on to other parties,such as consumers, then it will do so, provided the macroeconomic effects are not too severe. In most cases it won’t even try to measure the extent of the cost-shifting; one will note, forexample, that the Commonwealth’s PBS statistics, while being extensive for subsidizedpharmaceuticals, are silent when it comes to non-subsidized prescriptions.
One may believe that a government does not wish cost-shifting to result in inflation. But lowconsumer price inflation in other areas (clothing, household goods) has tended to compensatefor health care price inflation.8 In general, under both Labor and Coalition administrations, the Commonwealth has relied oncompetition policy to achieve microeconomic reform, but retail pharmacy has managed toshield itself from national competition policy.
To justify this exemption, pharmacists like to portray themselves as “consumer friendly”,using emotive terms such as “community pharmacy”, but former ACCC Chair Alan Fels, re-frames that perception. The local pharmacy is part of a well-organized highly profitableindustry: Australia’s 5000 pharmacies are among the most protected businesses in thecountry, wrapped in state and federal regulations that restrict their operations inalmost every conceivable way.
The states license both pharmacists and their premises, limit ownership to qualifiedpharmacists (largely precluding corporate ownership), limit the number of From 1992 to 2003 health care inflation has been at about one percent greater than general inflation(AIHW Health Expenditure Bulletin 2002-03). Over the last five years to 2005, the gap between healthinflation and general inflation as measured by CPI components has widened to 2.3 percent.
pharmacies owned, require a pharmacist to always be in attendance, and restrictadvertising and promotion.
Canberra weighs in with another raft of controls on dispensing fees, discountprohibitions on drug prescription costs, limits on the number and location ofpharmacies (geographical monopolies) and, of course, further controls onadvertising.
Chemists provide a critical health service, and deal in dangerous drugs, so many ofthese controls are necessary. But successive inquiries have expressed concern at theanti-competitive effects of the awesome array of controls – namely, that consumerspay higher prices.
Community pharmacy in Australia is a $6 billion business with 40,000 employees.
It is also very profitable. The average pharmacy operating margin is 8 per cent,several times larger than the “all retailing” average of 2 per cent.9 The retail pharmacy industry has become so used to these privileges that it seems to haveforgotten what a competitive market would look like. In a use of language that Orwell wouldclassify as Newspeak, the Pharmacy Guild claims that for pharmaceuticals priced below thepatient co-payment “market forces apply and pharmacists can compete with each other as towhat price they might charge”.10 It’s a strange idea of “market forces”, when priceadvertising is specifically prohibited, and when location regulations make it difficult forconsumers to shop around. How is a consumer to know what is a reasonable price withoutany reference point of comparative price information? How is a consumer to find, forinstance, unless he or she has a particularly friendly pharmacist, the price the Commonwealthpays for common generic pharmaceuticals – $11.28 for the contraceptive pill and $8.54 forAmoxycillin?11 If they want market forces to work, why does the Commonwealth not makethese prices readily available to consumers on a website? Where can consumers find the agreed “special patient contributions”? What holds for PBS pharmaceuticals also holds for non-prescription pharmaceuticals inSchedule 2 (pharmacy only) and Schedule 3 (pharmacist only), and for private prescriptionsnot covered by PBS subsidies. Australians, on average, spend $400 a year on “Medicines,pharmaceutical products and therapeutic appliances” other than prescriptions, most of whichwould be spent in pharmacies.12 With private health insurance permitted to cover privateprescriptions, there is a further suppression of any market discipline on pharmacists’ pricing.
Alan Fels and Fred Brenchley “Dispense some competition to the pharmacies” Sydney M orning HeraldApril 8 2004.
Correspondence from Pharmacy Guild of Australia to the ACA, 28 January 2005.
Levonorgestrel with ethinyloestradiol 21 tablets, Ampicillin capsule 250 mg x 24, December 2004 prices.
ABS Household tables (Cat 6535.05) indicate average weekly expenditure on “M edicines, pharmaceuticalproducts and therapeutic appliances” to be $11.51, of which $3.71 is for prescription pharmaceuticals.
Conclusion
I have not touched on the issue of whether pharmacies should be permitted to operate withinsupermarkets. On that delicate topic I’d suggest that it could result in useful pricecompetition and the convenience of more consumer-friendly opening hours. The retailpharmacy industry claims that the quality of professional service would be compromised, butwhen the ACA surveyed the industry in 2004 it gave the industry a less than glowing reportcard; the quality of professional advice was below the standard the ACA would have sought.13 In two thirds of the 87 pharmacies visited by ACA’s experts the quality of advice was rated as“poor”.
The short term prospects for competitive reform don’t look promising, with bipartisansupport for the status quo. The history of economic privilege suggests that it is very hard todislodge; once a group, particularly a small well-defined group, gains privilege, theyaccumulate the means to defend that privilege.
I recall a similar mythology about tariff protection, however. Tariff protection was anembedded aspect of the Australian Settlement; no government was going to demolish it. Butthat demolition occurred, from an unlikely quarter – the Hawke Government, inheritor ofLabor’s tradition of protectionism. I might add that the consumer movement supported thosepolicies strongly.
Competitive reform, however, is not in itself adequate to serve consumers’ interests. Pharmacies in supermarkets or big chains like Walgreens would still preserve a separation ofpharmacy from other aspects of health care.
We need to think more widely than the existing supply-side structures like the PBS or “retailpharmacy”, and call on governments to take the lead in redesigning our health care programsinto divisions that respond to consumer interests.
“Dispensing advice” Choice September 2004.