A case of a patient with SUNCT syndrome treated with L Gardella, A Viruega, H Rojas & J NagelSanatorio Parque, Cordoba, Rosario, Santa Fe, Argentina Gardella L, Sanatorio Parque, Cordoba 2324, Rosario (CP 2000), Santa Fe, Argentina.
Received 12 September 2000, accepted 18 June 2001 wind, lateral head movements to the right and rapid eye movements also triggered the pain.After the painful SUNCT syndrome is a rare disorder.Sjaastad (1) ®rst episodes she suffered from hyperesthesia in the affected described this syndrome in 1978.The patient suffers area and the skin of the ipsilateral frontal region looked short-lasting, unilateral crisis of a neuralgic-type pain rough and irregular like `sandpaper'.Neurological of a severe intensity, centred in the orbital/periorbital examination, except for the above description, was area.This pain is accompanied by conjuctival injection, always normal.The previous clinical history and the CT scan were unremarkable.Indomethacin, amitripty- This syndrome has some similarities with cluster line, ergotamine and verapamil treatments were not headache (17) and ®rst-division trigeminal neuralgia.
helpful.The later use of prednisolone (60 mg daily for The treatment is carbamacepine, amitrptyline, pred- 6 days and then 20 mg daily for 10 days) and carbama- nisolone, indomethacin, verapamil, ergotamine, with cepine (800 mg per day for 11 weeks) brought bene®t unlikely and uncertain results (18).Very few cases by reducing the painful crises to one or two a day, but Because of these negative therapeutic results, we considered surgical methods (17, 20, 21).
A 48-year-old woman consulted a physician in April 1997 due to a painful condition in the right orbitofrontal area.She did not remember the exact date when symp- The patient was studied with cerebral magnetic reso- toms began, but reported that they started approxi- nance imaging (MRI) using paramagnetic contrast.
mately 4 or 5 years before our consultation.During those Different pulse sequences were applied with a General years she consulted lots of other physicians without Electric Signa superconductive magnet of 1.5 Tesla satisfactory results.She experienced between six and equipment.Axial, coronal and saggital images were seven episodes a day.The temporal pattern was about made in T1 y T2.Paramagnetic contrast was also given three or four times per week; of course this pattern was to the patient. She was examined using F.L.A.I.R. effect, related to exposition to pain triggers that she had saggital T1 effect and Fast Spin ECO T2.We also identi®ed.Each one consisted of an abrupt and intense performed spectroscopic and perfusion studies.
peak of 30±45 s, followed by a painful burning feeling The Fast Spin ECO T2 (Fig.1) study showed absence that lasted for 35 min to 2 h.The after-attack burning of demyelinating lesions in the axial as well as in the coronal series.The region of the cerebellopontine The neuralgic pain began in the medial canthus of angle was free of expansive processes.We observed an the right eye, involving later a triangular orbitofrontal important change in a superior cerebellar artery root.
area and, with less intensity, the upper half of her This vessel made contact with the right trigeminal nerve right cheek.During the peak of the pain there was ocular that appeared toned down (Figs 1, 2 and 3).
congestion, tearing, oedema (observed only in the eye- lids) and ipsilateral palpebral ptosis.Crises were not only spontaneous, but also were triggered by touching the periorbital area, brushing her teeth, yawning, chew- Under the effects of general anaesthesia with endo- ing and washing her hair.In addition, exposure to strong tracheal intubation and ECG, arterial pressure and # Blackwell Science Ltd Cephalalgia, 2001, 21, 996±999 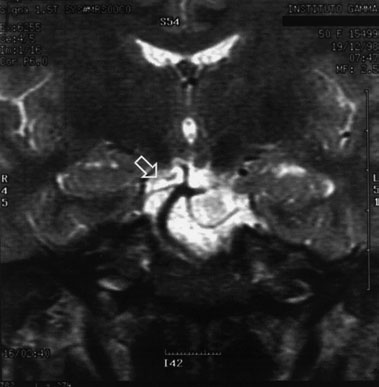 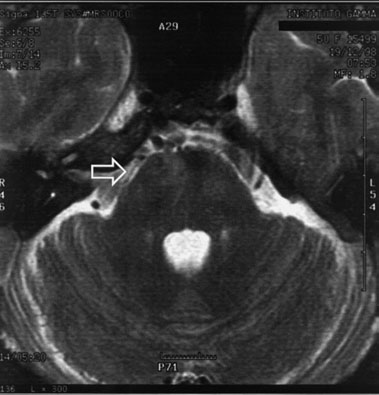 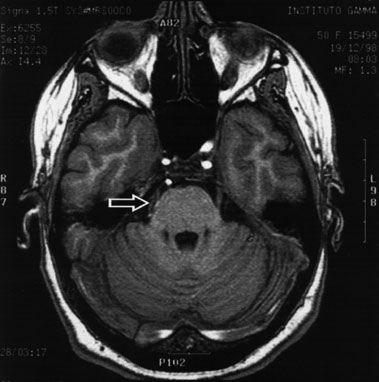 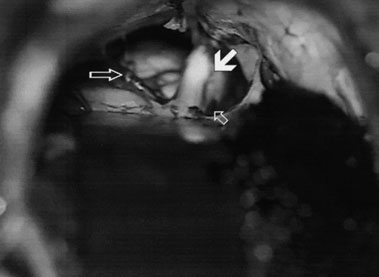 Figure 3 MRI axial T1WI: vascular structure (arrow) touching Figure 1 In the FAST SPIN ECHO effect a vascular structure the trigeminal nerve (with hyper-intense ¯ow signal in can be observed, like empty signal (arrow), in close relationship Figure 4 In this ®gure the trigeminal nerve can be seen (full arrow) entering into the pons.At this level it is being fenestrated by a branch (small empty arrow) of the superior cerebellar artery (big empty arrow).
the cerebellum.Once the Dandy's petrous vein wasfound, it was coagulated and cut, which allowed us to Figure 2 MRI Coronal plain: appreciable vascular structure (arrow) in contact with the right trigeminal nerve.
identify the ®fth cranial nerve in a vertical position,between the tentorium and the petrous bone, penetratingits border towards Gasser's ganglion.
gasometry monitoring, on left lateral decubitus (park Focusing on an area rather proximate to the entry zone bench position), a right suboccipital retro-mastoid cran- of this cranial nerve into the pons (Fig.4, fenesmacro) iectomy was performed.The duramatter was opened we noticed that a superior cerebellar artery branch in a semicircular shape following the latero-sigmoid penetrated into the trigeminal nerve and fenestrated it.
sinus limits, exposing the superior and later faces of This artery branch was dissected and separated from the # Blackwell Science Ltd Cephalalgia, 2001, 21, 996±999 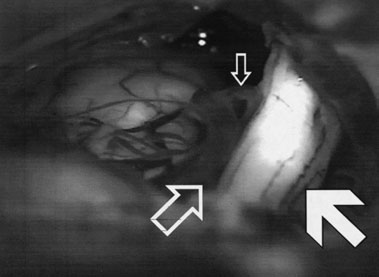 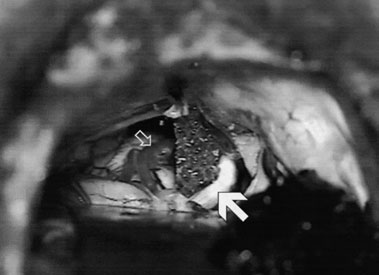