Biomedizinische Technik, 46 Suppl. 2: 242-244.
Statistical discrimination of controls, schizophrenics, depressives and
alcoholics using local magnetoencephalographic frequency-related
variables
Fehr T., Wienbruch C., Moratti S., Rockstroh B., and Elbert T.
University of Konstanz, Konstanz, Germany Introduction
[11]. Multiple source activity in the slow wave and alpharange was detected by the minimum-norm method [6,7].
Atypically enhanced activity in the delta and theta EEGfrequency bands has frequently been reported for schizo- phrenic patients, while alpha activity is often attenuatedin these patients [2,9,10,12]. MEG and EEG data provide 30 schizophrenic (predominantly paranoid or an advanced approach to analyze complex brain disorganized schizophrenia, 12 female, mean age functioning and to examine differences between different 31.1±8.6 years, 25 right-handed, 5 left-handed, 24 psychiatric patient groups due to their brain activity. Past medicated, 6 unmedicated), 10 depressive (7 female, analyses using different physiological parameters to mean age 47.5±7.6 years, 9 right-handed, 1 left-handed, 8 discriminate a psychiatric patient group from controls medicated, 2 unmedicated) and 12 alcoholic patients (1 reached statistical correct classification rates of at female, mean age 39.7±10.9 years, 11 right-handed, 1 maximum 80 percent. Results usually shifted to chance left-handed) and 18 healthy controls (2 female, mean age when adding a third group to the analysis. Winterer 31.7±12.4 years, all right-handed) served as subjects (2000) [13], for example, could discriminate between during a resting, a mental calculation and a mental schizophrenic patients and controls with a correct imagination condition (each in a 5 minute epoch).
classification rate of 77 percent when using delta power, In the resting period, subjects were asked to relax but signal power at Cz and power values of the high alpha stay awake and not to engage in any specific mental range as variables in a discriminant analysis. Including a activity; in the mental arithmetic period, subjects were group of depressive patients in the analysis reduced the asked to translate the words of a common German correct classification rate to 50 percent. Gallhofer (1991) folksong letter by letter into numbers (´a´ corresponding [5] used 50 topographical frequency-related EEG-para- to 1, ´b´ = 2, ´c´ = 3 etc.) and total them up; in the mental meters in a discriminant analysis with schizophrenic and imagery condition, subjects were asked to imagine as depressive patients and controls. He classified 49 out of vividly as possible walking a well-known and recently strolled footpath, e.g. through the hospital area.
Strategies that try to describe the physiological substrate Data were obtained from magnetoencephalographic re- of psychiatric diseases with only a few parameters cordings (148-channel whole-head neuromagnetometer, possibly over-simplify the nature of the phenomenon [see MAGNES WH 2500, 4D Neuroimaging, San Diego, also 5]. More complex strategies are possibly more USA) with a 678.17 Hz sampling rate, using a band-pass adequate to describe complex phenomena such like filter of 0.1-200 Hz. Subjects were asked to fixate on a colored mark on the ceiling of the chamber in order to The present study examined to what extent delta-, theta- avoid eye- and head-movement. For artifact control, eye and alpha-band-related source space activity can separate movements (EOG) were recorded from four electrodes controls, schizophrenics, depressives and alcoholics by attached to the left and right outer canthus and above and discriminant analysis. The analyses are meant as a first below the right eye. The electrocardiogram (ECG) was step towards an evaluation of a set of physiological monitored via electrodes attached to the right collarbone parameters that could possibly be representative of certain psychiatric gross groups. In order to explore For each of the measured epochs the data were band-pass possible methods sensitive to these physiological filtered in the delta [1.5-4.0 Hz], theta [4.0-8.0 Hz] and parameters, different strategies of MEG source space alpha [low: 8.0-10.5 Hz; high: 10.5-13.0 Hz] band, and analysis and statistical procedures were performed on the number of sample points was reduced by a factor of data obtained during three different mental modalities 16 prior to further source analyses.
(rest, mental calculation and mental imagery).
The multiple source activity was located employing sour- Enhancement in focal [1] as well as in multiple [4] slow ces by means of the minimum-norm (MMN) estimate wave activity has been reported for schizophrenic (L2-norm) [6,7] for the delta, theta and alpha range. Two patients. A reduction of alpha activity has been reported strategies were realized: MN1) Over all data time points
for schizophrenic [10,12] and alcohol [3] patients as well.
with a global field power between 3000 and 18000 [ft] For the analysis of focal sources we performed the dipole that did not correlate with a prominent eye-blink pattern a density method that has been shown as a valid tool in the MMN solution was calculated. The solutions were then vicinity of the detection of pathological attributed slow averaged over all time points; MN2) Emphasis on
wave activity for example around tumors [8] or lesions commonly occurring topographies (identified by a sepa- 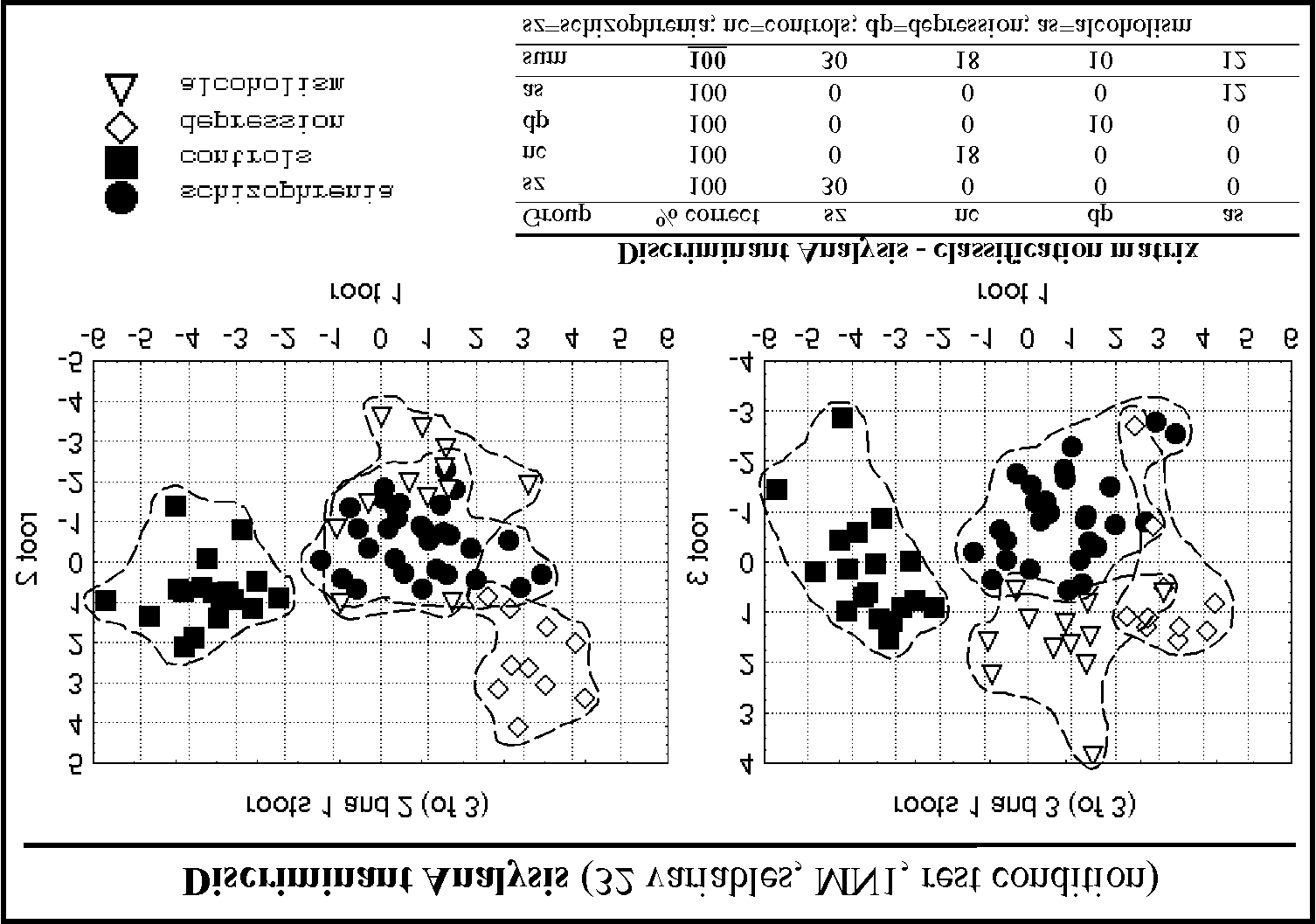 Biomedizinische Technik, 46 Suppl. 2: 242-244.
rate correlational analysis - reported elsewhere - , only for Discriminant Analyses
the delta and theta range): the analysis was repeated, Step 1 – delta and theta band (each 10 regions)
using only the 20 time points (topographies) with the strongest GFP. The resulting MMN-Maps of both strate- gies MN1 and MN2 were then divided in 10 regions (see Focal slow wave activity was determined by the dipole density method (DD) for the delta and theta range.
Artifact-free time segments were determined by visual inspection. Single equivalent current dipoles in a homogeneous sphere were fitted for each time point in Step 2 – delta, theta and alpha*) band (each 10 regions)
the selected epochs. Only dipole fit solutions at time points with a root mean square 100 fT < i)2)) < 300 fT and with a goodness of fit (GOF) greater than 0.90 were accepted for further analysis. These restrictions should ensure that neither artifacts nor small amplitude biological noise would affect the results, and that only dipolar fields that were generated by focal sources were analyzed. The percentage of dipoles fitted per second in a particular areawas submitted to the statistical analyses. The source Tab. 1: results of the discriminant analyses (first root of
space data of the DD were divided into 10 voxels, five in the discriminant function) for the different combinations each hemisphere: prefrontal, frontal, temporal, parietal of the source related variables (see text); DD=dipole density, MN1, MN2=minimum-norm strategy 1 and 2 Standard discriminant analyses were performed (see text); *) alpha low and alpha high were calculated separately for the slow wave related source values of each only for MN1 and added to the slow wave related source model (DD, MN1 and MN2) and condition (20 regional variables of the models DD, MN1 and MN2. source variables due to the delta and theta range). In a discriminant functions ranged between 90 and 99 percent.
second step all the models were added up by the multiple In a third step for all discriminant models the amount of alpha source values (alpha low and high, each band 10 included variables were stepwise reduced. Only one regional source variables) estimated by the MN1 strategy.
discriminant model could be improved by cancelation of In a third step the amount of variables in each discriminant model was stepwise reduced oriented on thepartial significance levels of the variables. The reductionended at that point when the models became worse (dueto their correct classification rates).
In a first step 20 frequency related regional sourcevariables (for the delta and theta frequency range) wereincluded in discriminant analyses for the different models(DD, MN1 and MN2, see methods) separately for eachcondition. The discriminant functions for the DD methoddid not reach significance (see table 1 for the results indetail) for all conditions. The discriminant function forthe MN1 and the MN2 methods reached significance forthe rest and the mental calculation condition and showeda trend for the imagination condition (see table 1). Thedifferent groups could be separated comparably well with Fig. 1: plotted loadings of single subjects (see legend for
a correct overall classification rate about 70 percent.
group identification) on the different roots of a In a second step all models were added up by 20 regional discriminant function (1st vs 2nd root and 1st vs 3rd root) source space variables of the lower and higher alpha band including 32 frequency band related source variables (model MN1, see methods). For the DD slow wave (model MN1, see text) and the corresponding variables in combination with the 20 MN1 alpha variables the discriminant function for the rest conditionwas significant (see table 1 for the results in detail). For A stepwise reduction of variables led to a model with 32 the multiple slow wave variables (MN1 as well as MN2) variables estimated by the minimum-norm method (in the in combination with the 20 MN1 alpha variables all rest condition, model MN1) that discriminated all three discriminant functions were significant (see table 1). The patient groups and the controls with a correct overall correct classification rates of the calculated classification rate of 100 percent (see table 2 and figure

The role of serendipity in basic research

ERC Launch Event, Berlin, 27-28 February 2007 The Role of Serendipity in Basic Research Tales of serendipity in scientific research are always intriguing. From Archimedes’ flash of inspiration while lowering himself into a bath, to Newton’s moment of clarity while sitting under an apple tree, it is clear that serendipity has played an important role in many fundamental scientific di