ALCOHOL PROMOTES DOPAMINE RELEASE IN HUMANS sion tomography (PET) and the dopamine receptor li-gand [11C]raclopride. We used a two-scan methodbased on evidence in primates, including combinedPET microdialysis studies, that the binding of benz-amides such as [11C]raclopride is sensitive and propor-tional to extracellular dopamine concentration in thestriatum (Endres et al., 1997; Ginovart et al., 1997;Hartvig et al., 1997; Laruelle et al., 1997; Laruelle,2000). This approach has been used in humans to mea-sure the dopamine response to psychostimulants (Car-son et al., 1997; Schlaepfer et al., 1997; Volkow et al., Study design. The vertical arrows indicate the time points 2001) and behavioral tasks (Koepp et al., 1998). Three of blood sampling, subjective mood assessments, and physiological recent PET studies have also shown that dopamine release following amphetamine occurs mostly in theventral striatum and that the amount of dopamine lected based on previous behavioral experiments show- released correlates with self-reported behavioral mea- ing that it was intoxicating but without signiﬁcant sures of euphoria or drug wanting (Drevets et al., 2001; adverse effects in this population. At the end of con- Leyton et al., 2002; Martinez et al., 2003).
sumption, subjects were immediately positioned in thescanner and a 12-min transmission scan was acquired MATERIALS AND METHODS
using a 68Ge source for the purpose of attenuation Seven healthy male nonalcoholic moderate drinkers correction. Following the transmission scan, and 15 (brief Michigan Alcoholism Screening Test, Pokorny et min after the end of alcohol consumption, [11C]raclo- al., 1972), age 22 (Ϯ0.6), were recruited from an exis- pride 10 mCi was injected as a bolus into the antecu- tent longitudinal cohort (Tremblay et al., 1994). All bital vein, after which PET dynamic acquisition (63 subjects who participated had experienced the alcohol slices, 26 time frames of 60 min total duration) was dose administered in this study at least twice in a laboratory setting. Data from one of the seven subjects Subjects were scanned on the CTI/Siemens ECAT had to be excluded due to excessive motion during the HRϩ PET camera with lead septa removed, with in- scan. All subjects were free of active or past medical or trinsic resolution 4.8 ϫ 4.8 ϫ 5.6 mm FWHM. Blood psychiatric illness. Subjects fasted and abstained from samples, for plasma alcohol measurements, were with- caffeine or tobacco for a minimum of 4 h before each drawn from the venous cannula before the initiation of test session. Five of the six subjects were nonsmokers drinking, at tracer injection (15 min after ﬁnishing and one was a light smoker (1–2 cigarettes per day).
drinking), and every 15 min thereafter. Subjective ef- They were also asked to refrain from taking drugs for 7 fects of alcohol, assessed with the Subjective High As- days and alcohol for 24 h prior to each experimental sessment Scale (SHAS, Judd et al., 1977; Schuckit et day. Before each scanning session, subjects underwent al., 1997), and heart rate were measured prior to alco- screening for drugs of abuse (Triage Panel for Drugs of hol consumption and throughout the procedure. The Abuse, Biosite Diagnostics, San Diego, CA) including SHAS is a visual analog scale that assesses sensations alcohol (Alcosensor III intoxicometer, Thomas Instru- such as feeling high, drunk, and drowsy. In a separate ments, Montreal, QC). All subjects read and signed a session, prior to the ﬁrst scan, all subjects completed consent form approved by the Research and Ethics the tridimensional personality questionnaire (TPQ; Committee of the Montreal Neurological Institute.
Cloninger et al., 1991). This test assesses three dimen- Subjects participated in two [11C]raclopride PET sions of personality, including novelty seeking (impul- scans after consumption of alcohol in orange juice or sive, excitable, exploratory temperament), which is orange juice alone (Fig. 1). Subjects were only told thought to depend in signiﬁcant part on activity in the about drink content (alcohol or orange juice alone) at dopamine pathways (Cloninger, 1994). For the purpose the beginning of the session, and they did not come into of anatomical co-registration, subjects also underwent contact with the drink until the time of consumption.
a 1 ϫ 1 ϫ 1 mm anatomical T -weighted MRI of the PET data acquisition was performed at the same time whole brain using a gradient echo pulse sequence of day (between 14:00 and 16:00) on separate days, 1 (TR ϭ 9.7 ms, TE ϭ 4 ms, ﬂip angle ϭ 12°, FOV ϭ 250, week apart, and counterbalanced for order of adminis- tration of alcohol (three out of six received alcohol on PET frames were summed across time, co-registered the ﬁrst day, randomly chosen). Prior to scanning, a with the corresponding MRI (Woods et al., 1993), and venous catheter was inserted in the subject’s left arm.
transformed into standardized stereotaxic space (Ta- Oral consumption of alcohol (1 ml/kg of 95% USP alco- lairach and Tournoux, 1988) by means of automated hol over 15 min) or alcohol-free mixture started 30 min feature-matching to the MNI template (Collins et al., prior to tracer injection. The dose of alcohol was se- 1994). Voxelwise [11C]raclopride binding potential (BP) 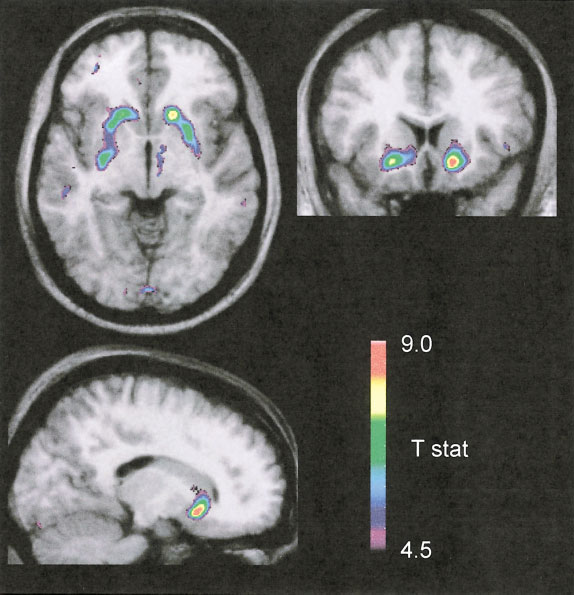 change in [11C]raclopride BP inducedby an acute oral dose of alcohol (1 ml/kg) in healthy volunteers (n ϭ 6). Colorclusters superimposed on the averageMRI from all subjects depict a signiﬁ-cant change in BP in the ventralstriatum.
was calculated using a simpliﬁed reference tissue session with orange juice that was greater than 2 SD method (Lammertsma et al., 1996; Gunn et al., 1997) to from the sample mean, magnitude of heart rate generate statistical parametric images of the change in change was analyzed with the nonparametric Wil- binding (Aston et al., 2000). BP values for each subject coxon matched pairs test. Maximum change in SHAS were extracted from regions of interest (ROI) manu- rating from baseline taken on the same day (⌬max ally drawn on the co-registered MRI on the left and [SHAS]) was used to evaluate the subjective effects right caudate (drawn on transverse slices at Ta- of alcohol and control drinks. A t-test for paired lairach-space z coordinate from ϩ2 to ϩ15 mm), pu- samples was used to determine the difference be- tamen (ϩ2 to ϩ10 mm), ventral putamen (– 8 to – 4 mm), NAc (– 8 to – 4 mm), and cerebellum, which was [SHAS] for the control. Stepwise linear regression used as the reference region. BP values extracted analysis was used to examine whether percent from ROI during alcohol and control scans were an- change in ROI BP could be predicted by changes in alyzed using a three-way ANOVA for dependent sam- heart rate, change in SHAS scores, or TPQ person- ples [Treatment ϫ ROI ϫ hemisphere]. Sphericity was assessed with the Mauchly test and, when indi-cated, corrections were made with Greenhouse-Gei- sser adjustments. When appropriate, least signiﬁ- Screening for drugs of abuse was positive for only one cant difference t-tests, Bonferroni corrected, were subject (THC and trace cocaine prior to both scan con- applied to determine the signiﬁcance of regional dif- ditions). Therefore, two different analyses were carried ferences in BP between the alcohol and orange juice out, one excluding the data from this subject. In both conditions. Heart rate during the ascending part of cases, receptor parametric mapping identiﬁed signiﬁ- the blood alcohol curve was compared to a baseline cant reductions in [11C]raclopride BP in bilateral ven- taken just prior to the study session. Since one sub- tral striatum in the alcohol compared to the alcohol- ject exhibited a change in heart rate during the test free condition (Fig. 2). In the statistically generated 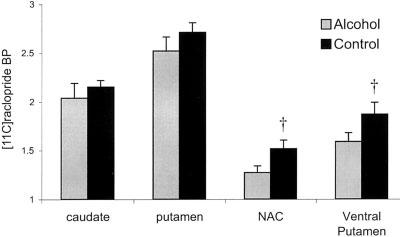 This article was presented on

PARASITE CONTROL WHILE GRAZING Animal Sciences Department, Purdue University Sheep make efficient harvesters of forage crops. However, one of the biggest challenges of grazing sheep is economical and effective control of internal parasites. Internal parasites can cause unthriftiness, reduced production, increased susceptibility to disease and other pests, and even death of sheep. Controlling