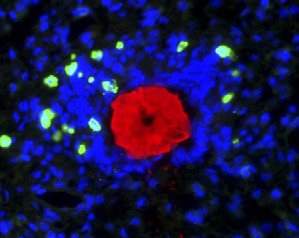 This issue’s Immunology Select discusses recent studies on allergic responses in mouse models of human dis-ease as well as how certain drugs, like the glucocorticoid dexamethasone, alleviate the symptoms of allergy.
There are many similarities between the immune responses to allergens and to par-asitic worms. In their new study, Reese et al. (2007) examined immune responsesin the lung tissue of mice infected with the helminth Nippostrongylus brasiliensis.
This parasitic worm migrates to the lung, where it molts and remodels its stiffpharyngeal feeding tube made of the biopolymer chitin before ascending the tracheaand being swallowed, thereby enabling it to access the intestine. In this model ofinfection, the mammalian proteins acidic chitinase AMCase and Ym1 and Ym2 (chi-tinase-like proteins) are produced in response to the transcription factor Stat6. Reeseet al. determined that there is Stat6-mediated production of AMCase and Ym2 in the lungs of mice at 3 days post worm infection. Given that AMCase is an enzymatically active chitinase, yet mammals lack chitin, the authors next examined whether the immune response could be mediated by the chitin discarded by the molting worms.
expressing cells (green) fromblood resulting in the produc- They administered chitin intranasally to introduce it into the lungs of mice, which re- sulted in recruitment of eosinophils and basophils within 2 to 3 days. This recruitment was abrogated by pretreatment of the chitin with enzymatically active AMCase. They next generated mice that overexpressed AMCase constitutively in the lung. When exposed to chitin, these mice had lowered inflammatory responses. Interestingly,the recruitment of eosinophils and basophils is independent of Stat6 but is dependent on the eosinophil chemoattractant leukotriene B4 secreted by macrophages. The authors go on to show that a spe-cial type of macrophage (an alternatively activated macrophage) appears in the lung tissue upon exposure of mice tochitin. The authors propose a model in which macrophages encountering chitin become alternatively activated andsecrete the chemoattractant leukotriene B4 in response to chitin in order to entice eosinophils to enter the tissue.
Subsequent production of AMCase in response to interleukin (IL)-4 and IL-13 produced by inflammatory cellsdegrades the chitin, thereby attenuating the response. Given the ubiquitous nature of chitin in the environment(it provides structural rigidity to fungi, crustaceans, and insects as well as worms and their eggs) and the incidenceof asthma in shellfish workers, chitin may be an important cause of allergy in humans.
T.A. Reese et al. (2007). Nature 447, 92–96. Published online April 22, 2007. 10.1038/nature05746. The Complex Effects of OsteopontinXanthou et al. (2007) examine the role of the cytokine osteopontin (a well-known mediator of the Th1 immuneresponse) in the Th2 immune response induced in a mouse model of allergic airway inflammation. First, theyshow that during allergic Th2 responses in this model, osteopontin expression is upregulated in the lung. In humans,lung biopsies from asthma patients exhibit increased osteopontin expression in lung tissue. Therefore, the authorsnext examined the mouse immune response in the absence of osteopontin, which they depleted using a neutralizingantibody to this cytokine. Interestingly, they found that osteopontin has a proinflammatory function at sensitization(first exposure to antigen), whereas it has an anti-inflammatory function during challenge (re-exposure to antigen).
During sensitization, blocking osteopontin results in reduced infiltration of leukocytes into the lung, decreasedmucus secretion, and reduced levels of interleukins (IL)-4, -13, -10 and the Th2-specific chemokine CCL22 (allindicative of a lessened Th2 response). The authors found that these effects were due to an increased number ofplasmacytoid dendritic cells (pDCs), which suppress Th2 responses. During challenge with antigen, however,mice injected with neutralizing antibodies to osteopontin exhibit enhanced Th2 responses, with increased numbersof inflammatory cells and eosinophils in the lung and increased amounts of IL-4, -13, -10, and interferon (IFN)-g. Theenhanced Th2 response was due to the increased recruitment of conventional dendritic cells. Importantly,administering osteopontin intranasally prior to challenge with antigen in the mouse model of allergic airwayinflammation resulted in decreased recruitment of immune cells to the lung and abrogation of the inflammatoryresponse.
G. Xanthou et al. (2007). Nat. Med. 13, 570–578. Published online April 15, 2007. 10.1038/nm1580. The Ins and Outs of Mast CellsThe sphingolipid, sphingosine-1-phosphate (S1P), induces a Th2 immune response and causes an increase incirculating IgE molecules resulting in enhanced release of histamines and other inflammatory molecules from Cell 129, May 18, 2007 ª2007 Elsevier Inc. 637

mast cells. S1P is generated in many immune cell types, including mast cells by phosphorylation of sphingosine bythe sphingosine kinases, SphK1 or SphK2. Olivera et al. (2007) created mice lacking SphK1 and/or SphK2 toevaluate how these kinases contribute to mast cell function. They found that SphK2 mediates mast cell responsesby regulating S1P production, mediating calcium ion influx, activating NF-kB, producing cytokines, and inducingdegranulation of mast cells. Loss of SphK2 reduced mast cell degranulation by 60%, and calcium ion signaling inSphK2-deficient mast cells was impaired. Meanwhile, increased intracellular calcium ion levels rescued the degran-ulation defect. Absence of SphK2 prevented translocation of protein kinase C to the cell membrane and NF-kBactivation. In contrast, mice lacking SphK1 had reduced amounts of circulating S1P and a defect in the anaphylaxisresponse. These anaphylaxis-resistant SphK1-deficient mice had low concentrations of circulating S1P, but mastcell degranulation was normal indicating that their mast cells are functional. Thus, it appears that although bothkinases regulate allergic responses, SphK1 is unexpectedly an extrinsic regulator important for anaphylaxis andcontrolling levels of circulating S1P, whereas SphK2 is an intrinsic regulator of mast cells.
A. Olivera et al. (2007). Immunity 26, 287–297. Published online March 8, 2007. 10.1016/j.immuni.2007.02.008. In the Fight against Allergies, Steroids Reign Supreme Regulatory T cells (Tregs) suppress immune responses includingallergic responses mediated by Th2 cells. Signaling through theglucocorticoid-induced tumor necrosis factor receptor related pro-tein (GITR), which is expressed by Tregs, alleviates Treg-mediatedsuppression of the immune system. The ligand of this receptor,GITRL, is present on dendritic cells including plasmacytoiddendritic cells (pDCs), a specialized population of dendritic cellsthat produce large amounts of type I interferon. Grohmann et al.
(2007) reveal that reverse signaling via GITRL counteracts signaling Dexamethasone treatment during the challenge via membrane-bound GITR in mice. They find that pDCs express phase of contact hypersensitivity reduces the infil- GITRL, which—upon stimulation with GITR—activates indole- tration of CD68-positive macrophages (green) in amine 2, 3-dioxygenase (IDO). This enzyme catabolizes trypto- wild-type skin (left) but not in skin expressing phan, an essential amino acid, thereby suppressing growth. They a glucocorticoid receptor that cannot bind to DNA also show that activation of IDO depends on the noncanonical (right). Image courtesy of J. Tuckermann and NF-kB pathway. When administered to mice, the glucocorticoid dexamethasone induced the expression of GITR by CD4+ T cellsand GITRL by pDCs. In an experimental mouse model of allergic bronchopulmonary aspergillosis (a Th2-mediated allergic response), treatment of mice with dexamethasone re-duces the symptoms in an IDO-dependent manner. Thus, the GITRL-dependent modulation of tryptophan catabo-lism could be one way in which glucocorticoids alleviate symptons of allergy.
Although topical application of glucocorticoids are known to alleviate symptoms of contact allergies, such as those generated upon contact with poison ivy, it is not clear which cells they target and how they mediate theireffects. Glucocorticoids suppress many kinds of genes encoding inflammatory molecules including cytokinesand chemokines. Their effects are mediated through the glucocorticoid receptor (GR), a nuclear hormone receptor.
Tuckermann et al. (2007) induced contact hypersensitivity in a mouse model of human contact allergy and found thatdexamethasome treatment did not affect the allergic response during the first exposure to the allergen (thesensitization phase). However, treatment with dexamethasone 1 hr before reapplication of the contact allergen,i.e., during the challenge phase, prevented the inflammatory response. Which cell types are sensitive to glucocor-ticoid action? Using GR mutant mice, the authors found that dexamethasone did not suppress the immune responsewhen contact hypersensitivity was induced in the absence of GR in myeloid cells (macrophages and neutrophils).
The authors go on to show that dimerization of GR and the ability of the dimer to bind to DNA and presumablyactivate transcription are required for dexamethasone to suppress the immune response. The authors show thatdexamethasone treatment prevents production of several cytokines and chemokines by macrophages and neutro-phils that normally induce leukocytes to migrate the site of contact. This study indicates how dexamethasone helpsto suppress inflammation in response to contact allergens.
U. Grohmann et al. (2007). Nat. Med. 13, 579–586. Published online April 8, 2007. 10.1038/nm1563.
J.P. Tuckermann et al. (2007). J. Clin. Invest. 117, 1381–1390. Published online April 19, 2007. 10.1172/JCI28034. Cell 129, May 18, 2007 ª2007 Elsevier Inc. 639