Using Latent Semantic Indexing for Literature
Based Discovery
Michael D. Gordon
Computer and Information Systems, School of Business, University of Michigan, Ann Arbor, MI 48109-1234.
E-mail: [email protected]
Susan Dumais
Microsoft Research, Redmond, WA 98052. E-mail: [email protected]
Latent semantic indexing ( LSI ) is a statistical technique
As described by Swanson, there are two basic literature for improving information retrieval effectiveness. Here,
discovery processes. The first leads from the literature we use LSI to assist in literature-based discoveries. The
( R ) associated with an initial topic to the literatures ( I ) idea behind literature-based discoveries is that different
of one or more related, intermediate topics. The second authors have already published certain underlying scien-
tific ideas that, when taken together, can be connected
leads from one of these related topics to the literature to hypothesize a new discovery, and that these connec-
( PD ) associated with a potential discovery. Figure 1 illus- tions can be made by exploring the scientific literature.
trates these two steps ( left to right ) .
We explore latent semantic indexing’s effectiveness on
We call these two processes identifying intermediate two discovery processes: uncovering ‘‘nearby’’ relation-
literatures and identifying potential discovery literatures, ships that are necessary to initiate the literature based
discovery process; and discovering more distant rela-
respectively ( Fig. 1 ) . Our interest is learning if latent tionships that may genuinely generate new discovery
semantic indexing ( Deerwester et al., 1990 ) , a statistical hypotheses.
technique used with success in information retrieval, canhelp with either or both of these processes.
Introduction
Identifying Intermediate Literatures
Literature-based discovery uses the published, scien- tific literature as a source of new discovery. First dis- By definition, if we start with Raynaud’s and discover cussed by Swanson ( 1986 ) in connection with Raynaud’s a brand new concept ( cure, cause, treatment, or physio- disease, the problem can be characterized in this way: logical process ) never before reported, there will be no Beginning with the literature, R ( for Raynaud’s ) , on some document that discusses both Raynaud’s and this new subject, can you identify the literature on another subject concept. But there may be a topic that is discussed along that helps in better understanding R , even though no one with Raynaud’s and is also discussed along with the new has ever thought that these two subjects were related? 1 In concept, even though no single article on this topic dis- a series of papers, Swanson ( 1986a, 1986b, 1987, 1988a, cusses both. A literature that serves as such a bridge is 1988b, 1989a, 1989b, 1989c, 1990a, 1990b, 1991, 1993 ) showed this could be done, both by intensive reading Finding intermediate literatures, then, is a central prob- and study, and by semiautomatic methods involving text lem in literature-based discovery. Of course, one can read analysis. Subsequently, Gordon and Lindsay ( 1996 ) have about Raynaud’s and form impressions on that basis, but replicated Swanson’s results and used other statistical a systematic approach for identifying intermediate litera- methods to help automate the literature discovery process.
tures would be more efficient and possibly more effective.
The following is an example of a MEDLINE record containing the term Raynaud’s ( with slight cosmetic mod- 1 Literature based discoveries generate scientific hypotheses; con- ifications to illustrate more plainly the record’s structure ) : ventional scientific research must be conducted if the hypothesis is tobe confirmed.
TITLE: Localized real-time blood flow measurements.
AUTHOR: van As H; Brouwers AA; Snaar JE Received January 31, 1996; revised April 30, 1997; accepted April 30, CITE: Arch Int Physiol Biochim 1985 Dec; 93 ( 5 ) : 87 – ᭧ 1998 John Wiley & Sons, Inc.
JOURNAL OF THE AMERICAN SOCIETY FOR INFORMATION SCIENCE. 49 ( 8 ) :674 – 685, 1998 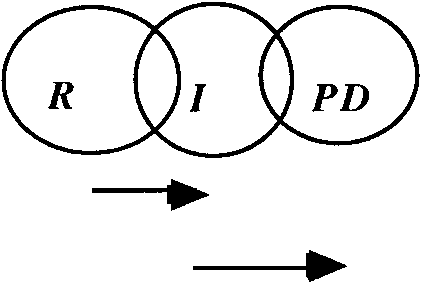 ABSTRACT: A novel method for real time, localized, Four statistics used to identify intermediate literatures.
flow measurements is applied to blood flow in human fingers. Results for arterial and venous flow in normalsubjects and patients with abnormal blood circulation are number of tokensb of X within R presented. Effects of blood flow regulation by the auto- number of records in R containing X nomic nervous system have been observed. Stricture of the digital arteries could be clearly demonstrated in a patient with Raynaud’s phenomenon. Experimental sig- nals due to pulsatile flow in a model system can be simu- lated in a quantitative way. The calibration, however, depends on the actual spin – spin relaxation time and the shape of the pulsatile flow vs. time curve. Due to these Strictly, frequencies should be ratios, but the normalizing denomi- nators in these statistics may be dropped since what is important is limitations, the volume flow rate can be measured with term (or phrase) rank orderings, which are identical with and without a relative error of approximately / / 025%. ( AUTHOR ) b Token frequencies count each distinct occurrence of a word (or MINOR TERMS: Fingers BS. Human. Nuclear Magnetic phrase). For instance, in the sentence ‘‘Row, row, row your boat gently down the stream,’’ the token frequency for row is 3; for gently it is 1.
On the other hand, the record frequency of both of these items is incre- For a term or phrase, X , these four statistics may be calculated in relation to the literature on Raynaud’s literature, R .
Among other non-‘‘noise’’ words, this record containsblood and flow ( from the title ) , flow, blood, fingers, etc.
( from the abstract ) , plus other words from the remaining quency of 2; and Raynaud’s had a token frequency of 1.
MEDLINE record fields. Similarly, the two-word adja- Similarly, the phrase blood flow had a token frequency cency phrases in this MEDLINE record include localized of 4, whereas as blood circulation had a token frequency real, real time, time blood, blood flow, flow measurements of 1. For this single MEDLINE record, the record fre- ( from the title ) , n ovel method, real time, time localized, quency for each of these words and phrases is 1.
localized flow, flow measurements, blood flow, and blood Table 2 gives an example of the four statistics that circulation ( from the abstract ) . Standard information re- would be computed for the term ( or phrase ) X , which trieval techniques can eliminate from consideration non- occurs both within and outside the Raynaud’s subset of substantive words, such as a, for, and is, and can use sentence punctuation to prevent the inclusion of false Gordon and Lindsay ( 1996 ) used these statistics to try phrases such as fingers results ( from the abstract ) .
to identify intermediate literatures for further exploration.
Gordon and Lindsay ( 1996 ) have investigated auto- After calculating each of the four statistics for every term mated processes for supporting the identification of inter- or two-word adjacency phrase in a downloaded literature mediate literatures from MEDLINE records such as these ( such as Raynaud’s ) , they identified the twenty ( or that are based on descriptive statistics similar to those thirty ) items with the highest values for each statistic.
used in information retrieval. Specifically, to identify in- They then considered each of these items to be a query termediate literatures related to the topic Raynaud’s, they that that could be used to identify a different intermediate downloaded the full MEDLINE records for all 1983 – literature. Though the methods used were highly auto- 1985 2 documents that mention Raynaud’s, parsed them mated, the intended use of these methods was to provide as described for the sample record, and then computed support for a qualified medical researcher who could most the statistics shown in Table 1 for every term and two- effectively interpret and act upon the data provided.
In examining the four separate lists of highest-ranked For the MEDLINE record shown above, the word time items, Gordon and Lindsay concluded that three of the had a token frequency of 4; localized had a token fre- statistics — token frequency, record frequency, and tokenfrequency * inverse global record frequency ( igf ) — wereextremely predictive of each other. If a particular term orphrase, such as blood, was among the top 20 positionson one of the lists, very likely it was among the top 20of another list as well. As a specific example, in analyzingthe Raynaud’s literature the four statistics were computedfor each of the approximately 2,000 single-word termsthat occurred at least four times in that literature. If the The two steps in literature-based discovery.
terms on the top 20 list for one statistic were statisticallyindependent of those on another, a fractional number should appear on both lists. What was observed, instead, This date range was the same one that Swanson used and supported Gordon and Lindsay’s replication of Swanson’s results by new methods.
was that the token frequency and record frequency lists JOURNAL OF THE AMERICAN SOCIETY FOR INFORMATION SCIENCE—June 1998 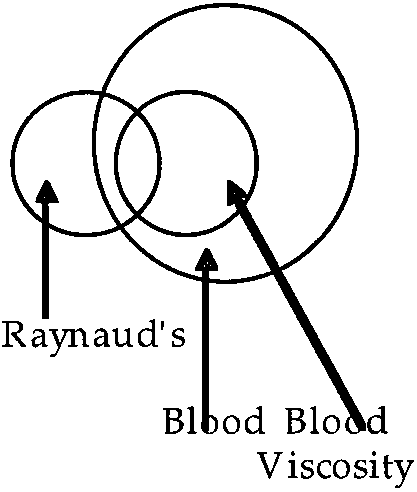 Fictitious numerical example showing calculation of four statistics for term Document collection characteristics
Number of Documents
R Å documents mentioning Raynaud’s Subset of R mentioning term (phrase) X Token characteristics
Number of Token occurrences
Statistics
Value of Statistic
tf * inverse global record frequency (tf * igf) had fifteen ( of twenty ) items in common; the token fre- the hypothesis that Raynaud’s might be treated by fish quency and token frequency * igf lists had seventeen; and oil lay dormant in the literature until Swanson ( 1986a, the record frequency and token frequency * igf had fifteen.
1986b, 1987 ) uncovered it by methods of literature-based In other words, an item’s appearance on the top 20 list for one statistic was highly correlated with its appearance To summarize, Gordon and Lindsay ( 1996 ) demon- on the top 20 list of the other two. The same conclusion strated three statistics that were useful for uncovering held when the number of items per list was increased; intermediate literatures to support literature-based discov- when two-word adjacency phrases were considered rather ery: token frequency, record frequency, and token fre- than single-word terms; and when literatures other than quency * inverse global record frequency. Each of them separately rank-ordered large lists of terms ( and phrases ) There was not nearly the same degree of correlation in quite similar ways. And from the starting point ( Ray- between a term’s occurrence on the top 20 list for relative naud’s in this example ) , a medical researcher using these frequency and its occurrence on the top 20 list of another statistics could be led first to blood, and then to blood statistic. Again considering Raynaud’s as an example, the viscosity, by any of these three statistics ( Fig. 2 ) . Gordon top 20 items sorted by relative frequency included one and Lindsay argued that an effective method for identi- item in common with the top 20 token frequency items; fying an intermediate literature is finding one with strong one item in common with the top 20 record frequency conceptual similarity to the starting point and that each items; and one in common with the top 20 token fre- of the three correlated statistics can serve this purpose, quency * igf items. This pattern held for single words since each has lexical prominence in the Raynaud’s litera- and two-word adjacency phrases, when the top n size was adjusted ( to values other than 20 ) , and when different Latent semantic indexing ( Deerwester et al., 1990 ) offers an entirely different way potentially to identify Not only were the token frequency, record frequency, intermediate literatures and, thus, to support literature- token frequency, and tf * igf lists quite similar, but they based discovery. A standard term by document matrix, were effective in uncovering intermediate literatures on D , is mathematically equivalent to the product of three a discovery path from Raynaud’s to fish oil. By looking other matrices, as shown in Figure 3. M is a matrix of at the very top items on any of the three lists, one was singular values computed by a ‘‘factoring’’ process — led from Raynaud’s ( the starting point ) to the topic blood. singular value decomposition ( Forsythe et al., 1977 ) — Then, by downloading and analyzing the literature on thetopic blood AND Raynaud’s, one was led directly by anyof the three statistics to the topic blood viscosity ( seeFig. 2 ) . Blood viscosity is indeed an intermediate, or‘‘bridge,’’ literature: It is mentioned in the Raynaud’sliterature and is clearly accepted scientifically as beingrelated to Raynaud’s. It is also mentioned in the fish oilliterature, and is scientifically related to that as well. In-deed, there are physiological connections implicating fishoil as a treatment for Raynaud’s, including that fish oilreduces blood viscosity and that increased blood viscosityis one of the reasons Raynaud’s patients suffer symptomsassociated with peripheral blood deficiency. Despite this, Raynaud’s and two intermediate literatures.
JOURNAL OF THE AMERICAN SOCIETY FOR INFORMATION SCIENCE—June 1998 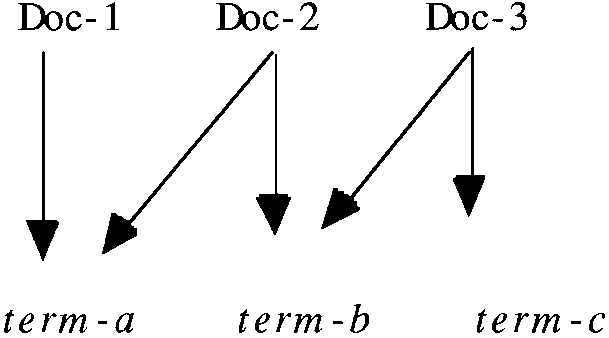 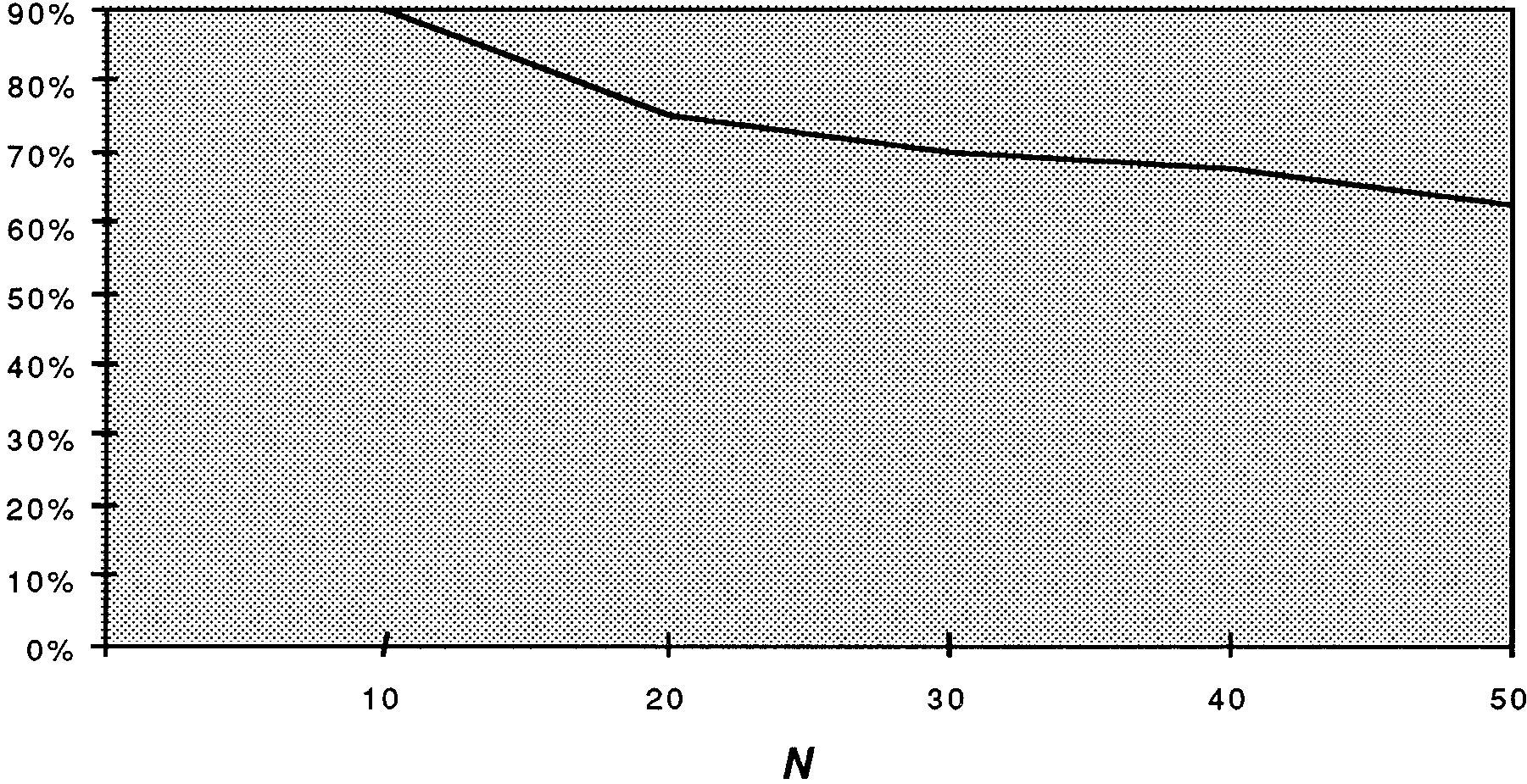 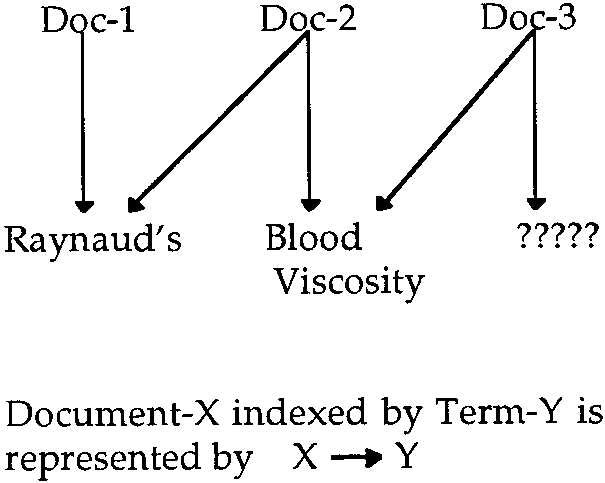