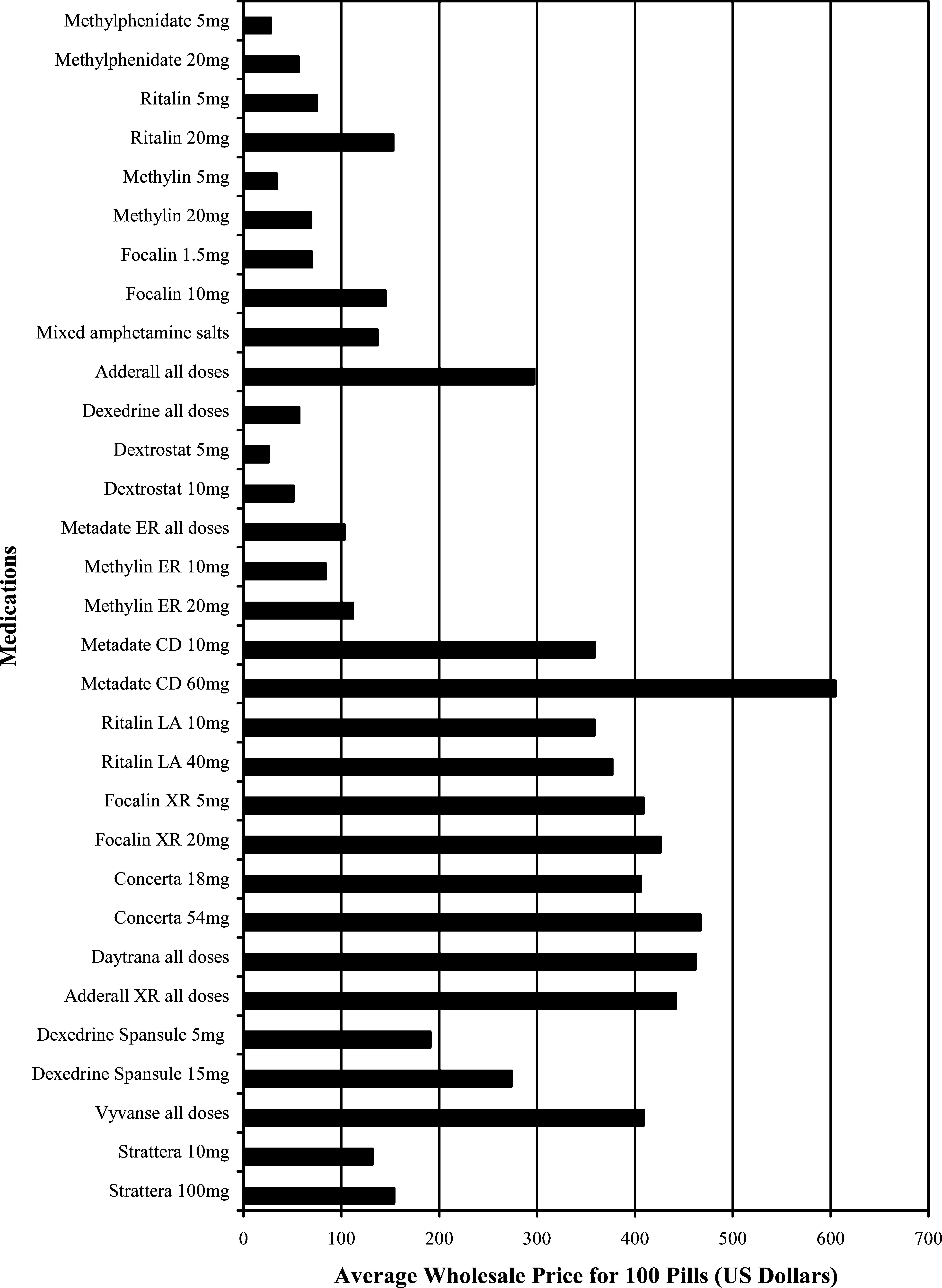 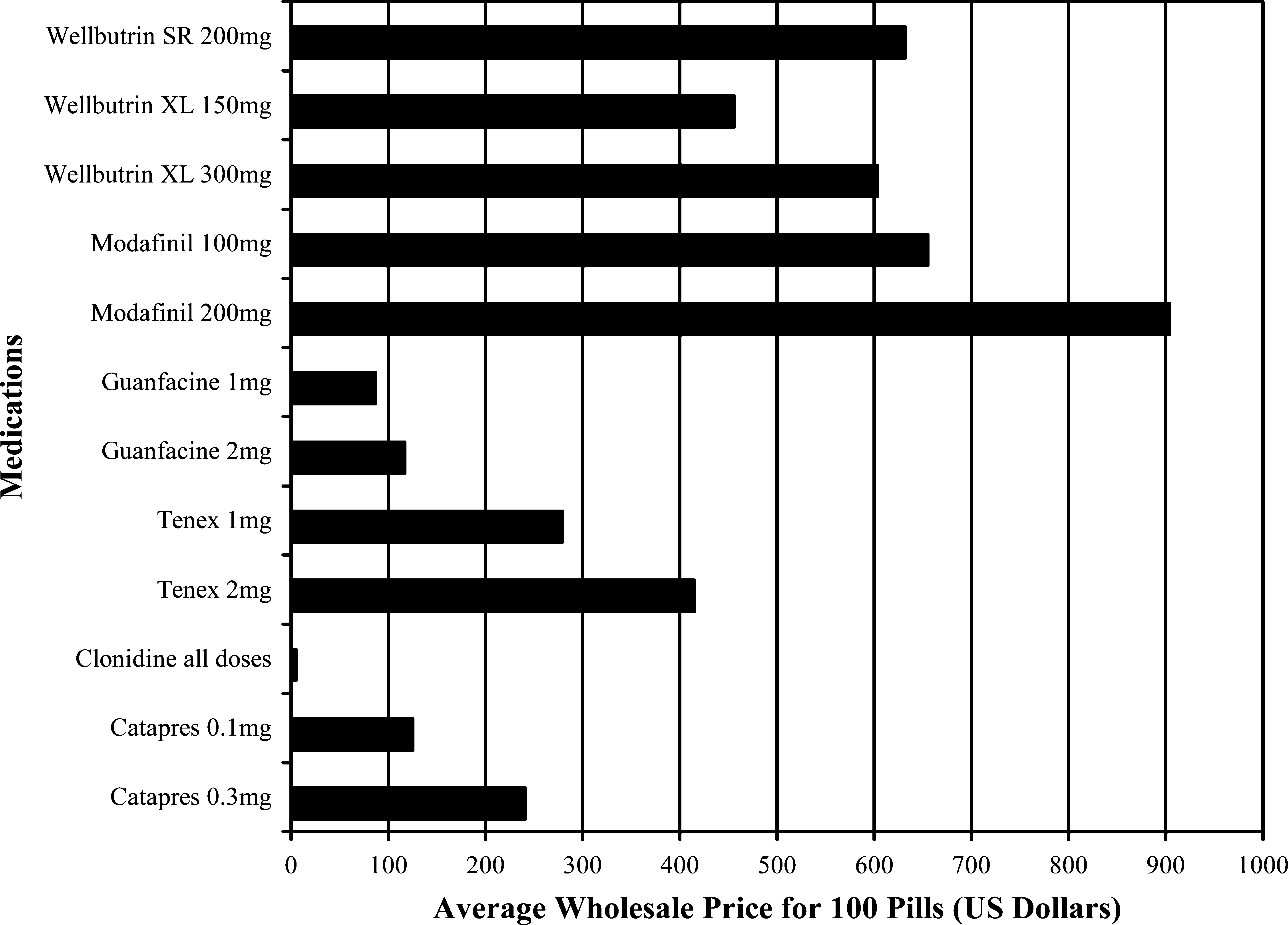 See Table 4 for all nonYFDA-approved medications. See • An extended-release guanfacine preparation has Figure 2 for a cost comparison for all nonYFDA- recently received a letter of approvability by the FDA.
approved medications summarized below.
When to Use: Their current role in the treatment of ADHD is primarily as adjunctive medication in those Alpha Agonists (Not FDA Approved for ADHD) patients who do not respond to and/or those who Clonidine (Catapres) and guanfacine (Tenex) are cannot tolerate the FDA-approved treatments.
alpha agonists, which seem to stimulate inhibitory presynaptic autoreceptors in the central nervous system Bupropion (Wellbutrin, Wellbutrin SR, and Well- at lower doses. They have demonstrated use alone or butrin XL) is an antidepressant that acts via dopamine Advantages: The alpha agonists may be useful for core Advantages: Although its therapeutic effect seems to be symptoms of ADHD, as well as associated sleep and tic less than that of stimulants or atomoxetine, it does have demonstrated efficacy in the treatment of ADHD.3 Disadvantages: Their half-lives may necessitate multi- Disadvantages: Common side effects include ir- ple daily doses. Because of their antihypertensive proper- ritability, anorexia, insomnia, and, less commonly, ties, use of these medications may lead to hypotension development of tics. The risk for drug-induced and orthostasis. There have been several case reports of seizures increases 10-fold at dosages greater than unexpected sudden death in children taking the com- bination of clonidine and methylphenidate, although a controlled study of the combination of these twomedications found no evidence of cardiac toxicity.
• It is also approved for smoking cessation (Zyban).
• Clonidine is available in a patch, allowing once-daily • This is another medication that is primarily adjunc- tive treatment or after first-line treatments have failed.
Fig. 2 Cost comparison of nonYFood and Drug AdministrationYapproved medications.
J. AM . ACAD . CHILD ADOLESC. PSYCH IAT RY, 48:3, MARCH 2 009 Copyright @ 2009 American Academy of Child and Adolescent Psychiatry. Unauthorized reproduction of this article is prohibited.
• It may have a role in patients with co-occurring mood 2. Differences between long-acting stimulant prepara- disorders, substance abuse, or smoking.
tions that influence treatment planning include du-ration of action, cost, ability for children to swallow Modafinil (Provigil) is an antinarcoleptic stimulant 3. Nonstimulant medications are effective as primary as agent that is believed to produce a wakeful effect by well as adjunctive treatments for ADHD.
activating the cortex and may be useful for enhancing 4. NonYFDA-approved medications can be used effec- general arousal, attention, and motivation.
tively and safely as adjunctive treatments for ADHD Advantages: Modafinil demonstrated efficacy in three or when first-line treatments have failed.
double-blind placebo-controlled studies of ADHD in 5. Awareness of the various characteristics of each medication that has been studied in the treatment of Disadvantages: Commonly reported side effects in- ADHD allows for optimal care for each individual clude insomnia, decreased appetite, and headache. This medication was not approved by the FDA for thetreatment of ADHD because, at least in part, of safetyconcerns about a rare but serious rash (e.g., erythema Disclosure: Dr. Kratochvil receives research funding from NIMH multiforme) characteristic of Stevens-Johnson syn- Grant 5K23MH06612701A1. He receives grant support from Eli drome.1 Lastly, the cost of this medication often li- Lilly, McNeil, Shire, Abbott, Somerset, and Cephalon; is a consultantfor Eli Lilly, AstraZeneca, Abbott, and Pfizer. He is the editor of the Brown University Child & Adolescent Psychopharmacology Update, a member of the REACH Institute Primary Pediatric Psycho-pharmacology Steering Committee, a member of the American Profes- • Studies have shown increased efficacy doses in the sional Society for ADHD and Related Disorders Board of Directors,and on the CME Outfitters Professional Advisory Board. He receives study drugs for an NIMH-funded study from Eli Lilly. The otherauthor reports no conflicts of interest.
• This medication, if used at all, should be used with great caution because of the risk for Stevens-JohnsonYlike rash.
1. Beiderman J, Spencer TJ. Psychopharmacological interventions. Child Adolesc Psychiatric Clin N Am. 2008;17:439Y458.
2. American Academy of Pediatrics Committee on Quality Improvement and Subcommittee on Attention-Deficit/Hyperactivity Disorder. Treat-ment of attention deficit/hyperactivity disorder: overview of the evidence.
Pediatrics. 2005;115:e749Ye757 (doi:10.1542/peds.2004<2560).
3. Pliskz S. Practice parameter for the assessment and treatment of children and adolescents with attention-deficit/hyperactivity disorder. J Am Acad Child Adolesc Psychiatry. 2007;46:894Y921.
4. Faraone SP, Biederman J, Morley Christopher P et al. Effect of stimu- lants on height and weight: a review of the literature. J Am Acad Child http://www.nimh.nih.gov/health/publications/adhd/ Adolesc Psychiatry. 2008;47:994Y1009.
5. Hinshaw SP. Moderators and mediators of treatment outcome for youth with ADHD: understanding for whom and how interventions work.
http://www.parentsmedguide.com/pmg_adhd.html 6. Towbin K. Paying attention to stimulants: height, weight, and car- diovascular monitoring in clinical practice. J Am Acad Child Adolesc http://www.massgeneral.org/schoolpsychiatry/screeningtools_ 7. Red Book: Pharmacy_s Fundamental Reference. 2008 ed. Montvale, NJ: 8. Faraone SV, Spencer TJ, Aleadri M et al. Comparing the Efficacy of Medications Used for ADHD Using Meta-Analysis. Paper Presented at the 156th Annual Meeting of the American Psychiatric Association. SanFrancisco: May 2003.
9. Pelham WE Jr, Greenslade KE, Vodde-Hamilton M et al. Relative efficacy 1. Short-acting stimulant medications may be useful in of long-acting stimulants on children with attention deficit-hyperactivity lower weight children, in conjunction with a long- disorder: a comparison of standard methylphenidate, sustained-releasemethylphenidate, sustained-release dextroamphetamine, and pemoline.
acting stimulant, and when cost is a limiting factor.
J. AM. ACAD. CHIL D AD OLE SC. P SYCHIATRY, 48: 3, MARCH 2009 Copyright @ 2009 American Academy of Child and Adolescent Psychiatry. Unauthorized reproduction of this article is prohibited.

COMPANY NO. 507087 LIQUIDATORS FIRST REPORT Section 255 of the Companies Act 1993 RUAHINE TRADING LIMITED (IN LIQUIDATION) Formerly Trading as Norsewear of New Zealand Limited Was placed in liquidation on 29 January 2008 at 8.00am pursuant by special resolution of the shareholders and Iain Bruce Shephard and Christine Margaret Dunphy were appointed liquidators. Th