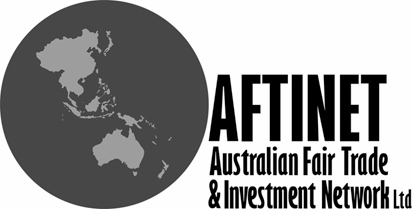 AFTINET Bulletin No. 137
If you would like to contribute to the Bul etin, please contact Michele Freeman on [email protected] or Phone (02) 9212 7242 Fax (02) 9211 1407 Previous AFTINET Bulletins and resources are available at www.aftinet.org.au.

1. Event announcements
China Labour Activist Tour
AFTINET has organised Chinese labour rights activist Monina Wong to visit Australia
from 23rd until the 27th July. Monina wil visit Sydney, Canberra and Melbourne to
exchange experiences about the impact of globalisation on workers in China
especially female workers and those in export processing industries and the
relationship to the proposed FTA with China. Further information will be available
from AFTINET in the coming weeks. For more information please contact Lorissa at
[email protected]

What Have We Traded Away? A Look at the AUSFTA Two Years On.
AFTINET will be hosting a lunchtime seminar on the 4th July to coincide with the US
and Australian Government’s Joint Advisory Committee review of the AUSFTA.
The event will be held in the Jubilee Room at NSW Parliament House from 12.30
until 2pm and subjects covered include health, economics and culture. Cost will be
$10 and this will include lunch. Invitations will be distributed closer to the event. For
more information please contact Lorissa at [email protected]

Alternative APEC events
As you may be aware AFTINET has convened a broad coalition of groups to work together on a public forum and conference to coincide with the APEC meetings to be held in Sydney in September. The events will examine the impact of APEC’s free trade agenda in the Asia Pacific region on labour rights, human rights and development, and climate change and the environment. The events will be peaceful, high profile and intelligent presentations of alternative ideas to the APEC vision. For more information please contact Michele at Public forum – Sydney Town Hall, 6pm Friday 31 August.
Featuring Sharan Burrow, President of the Australian Council of Trade Unions and
President of the Global Unions’ International Trade Union Congress.


5. Victory for Brazil on drugs patent
Brazil has decided to break the patent on an AIDS drug made by U.S company
Merck, and import a generic version from India instead. Brazilian President Luiz
Inacio Lula da Silva complained his country was paying more than double the price
Thailand was being charged for the drug Efavirenz. “it is not possible for someone to
get rich out of others’ misery, it is disrespectful, as if a sick Brazilian was inferior.”
This move is al owed under the WTO’s TRIPS agreement, which allows developing
countries to disregard patent rules in favour of public health.
Brazil is the only country in the southern hemisphere to give free AIDS drugs to all
Brazilians in a programme lauded by the UN.
Supplying a patient Efavirenz for one year currently costs Brazil $US580 compared
with $US166 for a similar generic drug.
This is an interesting development for Australia as the government is currently
overhauling the PBS system as a result of the AUSFTA.
6. Victoria may lift ban on GM produce
Under pressure from the Federal Government and the National Farmers Federation
it seems likely that Victoria will not renew its ban on GM food produce which expires
in February 2008. Both parties argue that GM crops will mean greater yields, require
less water and claim there is no risk associated with growing the crops.
The Network of Concerned Farmers and Greenpeace however disagree claiming the lifting of this bans removes choice from farmers and consumers as GM crops can easily contaminate conventional and organic farms. They also claim the much lauded benefits have not been scientifically proven. The US is presently the largest producer of GM produce where 75 per cent of all processed foods feature a GM ingredient. GM supporters claim that GM produce could assist developing countries through a greater availability of food which is cheaper to grow and holds extra vitamins and minerals. Critics however argue that food shortages in these countries have more to do with politics and economics, whereby growing different crops (ie pumpkin rather than rice) could address these issues, and without any long terms studies on the effect of GM produce on humans these countries should not become completely Agribusiness is at the forefront of the promotion of GM produce and stand to gain the most. "To have politicians that should know better, claiming that Australian farmers are missing out on traits like drought or salt tolerance and high yields is deliberately misleading and we need to ask why." "The beneficiaries of GM crops are the patent holders, the GM companies, the seed industry, the research sector and the governments who are encouraging corporate investment into research and development and planning to cash in on the technology
patents they currently own," explained Julie Newman of the Network of Concerned
Farmers
As Jason Koutsoukis said in the Sunday Age “To ask ask Big Agribusiness about
GM is a little like consulting Big Tobacco about the risks of smoking”.

7. Starbucks Strike Deal with Ethiopia
Starbucks and the Ethiopian government look set to agree to a deal which will al ow Ethiopia to trademark three of its speciality coffees. Oxfam have lobbied Starbucks to make this agreement. Starbucks is a global monolith with further expansion plans to increase the number of the company's coffee houses from 13,700 in 39 countries to 40,000. In 2006 the company had a $2.26 billion turnover. Rival coffee companies have recently begun marketing fair trade and organic coffees that cooperate with Ethiopia leaving Starbucks with little choice but to make the concession. The Ethiopian government is concerned that as with most of the world’s commodities the big profits accrue to the retailers and traders with little of the $4 a western consumer pays for a coffee being seen by the coffee growers. Ethiopian coffee labourers earn around 50 cents a day and approximately 11 mil ion Ethiopians rely on coffee for their livelihoods. Starbucks has previously enjoyed a sound reputation through its Fair Trade associations and farmer conscious guidelines however it originally rejected the trademark plan. Coffee historian Antony Wild, author of "Coffee, A Dark History", told US organisation CorpWatch that the proportion of the price of a cup of coffee is so small that even if farmers received 1,000 per cent more, the price in the coffee shop would rise only 5 per cent. Ron Layton, a Washington DC attorney with the organisation Light Years IP, who has been working with the Ethiopians on the coffee scheme, commented: "It's all a question of power-play." Layton says that quality coffees are coming into their own, but that producers have not gained much from them. His organisation suggests about 45 per cent of the high prices charged by retailers of gourmet coffees should be returned to growers: Trademarking could change that (which is why the Ethiopian experiment is being watched by other producers, and other commodities, around the world). Layton estimates that it could earn Ethiopia an extra $88 million a year - a significant gain for a country the United Nations Development Programme ranks as the eighth poorest in the world.

8. Fairtrade Sales Skyrocket
A rise in ethical shopping has seen sales of Fairtrade products in Australia skyrocket, helping to improve the lives of farmers in poorer countries. Food items such as coffee and tea are sourced from developing countries and sold under the Fairtrade label in Australia. Oxfam Australia says the farmers' families and communities lives have improved as a result of the decent prices being paid for their product. "Farmers receive a more reliable price then the usual arrangement and have a better chance of gaining access to better health care and education," Oxfam Australia executive director Andrew Hewett said. "This increases the seller's bargaining power, income and quality of life….and consumers can have confidence that what they are buying is not ripping off the producers," Mr Hewett said. According to Oxfam, the total value of Australia's Fairtrade retail sales in 2003 was $146,000, but the market is worth at least $8 million. Mr Hewett said major stores such as Coles supermarkets are selling Fairtrade products and boosting sales. 9. Jubilee Australia is currently seeking applications for the National
Coordinator Position
• Innovative research and campaigning for structural change • Lead a dedicated team of staff and volunteers • Four-day/week part-time position Would you like to work in one of the country’s most challenging and rewarding international human rights advocacy roles? Jubilee Australia, based in the Sydney CBD, is recruiting for the vital, demanding and rewarding position of National Coordinator. The National Coordinator must not only bring a special energy to the role but also possess a variety of abilities. S/he will have high quality research skills, be a persuasive advocate and communicator, be capable of making strategic campaign decisions, and of leading and motivating a talented team consisting largely of volunteers. Applications due COB 11 June. For more information go to: http://www.jubileeaustralia.org/files/_730_reports/National%20Coordinator.pdf